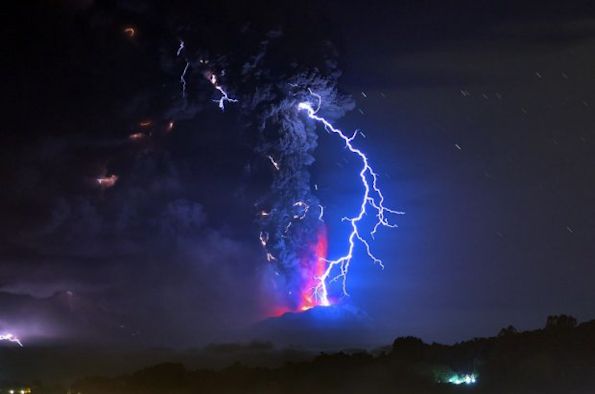 Oliver Lamb is a postgraduate student with the volcanology research group at the University’s School of Environmental Sciences.

“On April 22-23, Volcán Calbuco in Chile produced two large explosions throwing hot ash and gas over 15 km into the sky.  This was the first time the volcano had erupted since a smaller eruptive sequence in 1972.

Volcán Calbuco is the third most active volcano in the Southern Volcanic Zone, a long chain of active volcanoes stretching for hundreds of miles through Chile.  The chain has formed due to the subduction of the Nazca plate under the South American plate and includes over 60 volcanoes that have erupted in the past 10,000 years.

The two explosions ejected over 0.2 cubic km of material out of the volcano, forcing the evacuation of at least 6500 people from the area surrounding the volcano.

The eruptions left thick ash and pumice deposits over the surrounding region, leading to collapsed roofs and strongly affecting the local farms and salmon fisheries.

The deposits continue to pose a significant hazard as they can be reworked into fast-moving and destructive mud-flows, or lahars.

At its greatest extent, the ash cloud covered an area of 400,000 square kilometres, affecting a population of over 4 million people in Chile and Argentina, and disrupting air transportation across South America.

The Calbuco eruption was the third largest eruption in this region of Chile in the past decade, 4 or 5 times smaller than the eruptions of Chaiten in 2008 and Puyehue Cordon-Caulle in 2011.

What surprised everyone was how the eruption began with very little prior warning. An increase in the number of earthquakes beneath the volcano began only an hour before the first explosion.

The eruption at Calbuco is currently ongoing with a third but smaller explosion on Thursday dumping more ash over an area already attempting to recover from the first eruptions.

Detailed analysis of the data recorded prior to the first eruptions, combined with field and experimental work being carried out by the volcanology group in Liverpool, will provide us with new insights into how volcanoes such as Calbuco can produce such large eruptions with very little warning. ”