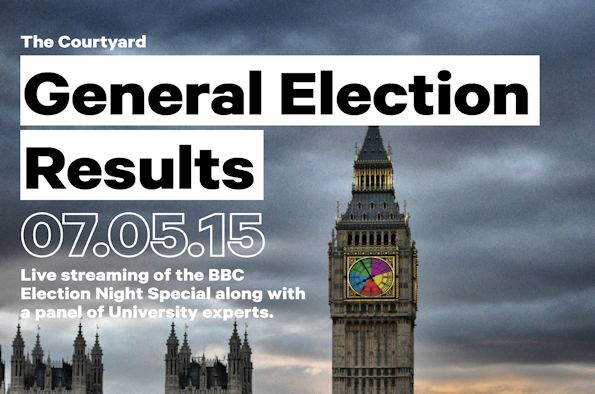 The University’s Department of Politics has teamed up with the Guild of Students to host an all-night General Election results event.

Starting at 9pm, BBC coverage of the election results will be shown on large TV screens in the Guild’s courtyard and, at regular intervals, a rolling panel of University experts will analyse and discuss the results as they come in.

Dr Stuart Wilks-Heeg, Head of Politics, said: “With the result of the 2015 UK General Election destined to be the most unpredictable and exciting in living memory, this event in the Guild of Students provides the ideal setting for staff and students to watch the results as they come in and hear up-to-the-minute analysis and predictions on local, regional and national results from University experts.”

Harry Anderson, President of the Guild of Students, added: “The Guild is the perfect backdrop to host coverage and discussions about the General Election.

“We’re really looking forward to Thursday – it will be great to give students and staff a place to come together to watch the action and share the experience with them.”

The Courtyard bar will be open until 5am,  food will be available to purchase and doors shut at 6am.  The event is open to staff, students and guests and no booking is required.

University experts have been providing extensive analysis of the General Election to the media.  Here are some examples of recent media coverage.