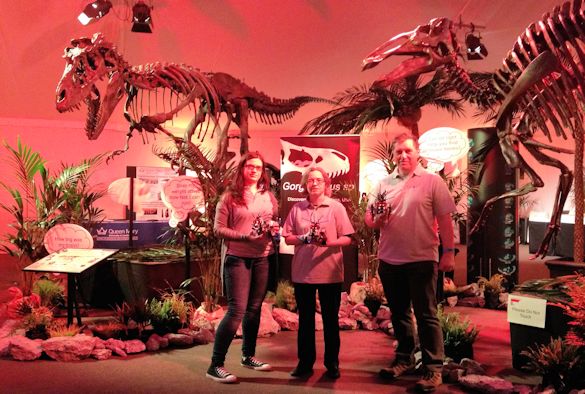 The CAST team in the Dinozone at the Cheltenham Science Festival

Researchers from the University’s Centre for Autonomous Systems Technologies (CAST) have been using Lego Robot Dinosaurs to demonstrate ideas from artificial intelligence, robots and space science to visitors to the Cheltenham Science Festival.

The Lego Robots were part of the Science and Technology Funding Council’s (STFC) DinoZone area at Cheltenham Science Festival, the largest and most well-known public science festival in the country.

The Lego Robot Dinosaurs were used to demonstrate to school children and the general public some of the concepts from autonomous robotics such as the use of sensors and artificial intelligence style programming with rules.

Dr Louise Dennis, who was part of the CAST team at the Festival, said: “Whilst our Lego robots are a lot simpler than those that will soon be deployed in the real world, it is possible to use them to demonstrate the fundamental principles of how information from sensors can be used to make decisions which, in turn, activate motors.

“These are the same fundamental principles that drive current research in autonomous systems which make the Lego Robot an ideal platform for engaging young people with this area.

“It was really exciting and rewarding to be part of the Cheltenham Science Festival.  We were able to introduce our robots to everyone from the smallest toddler who could just about press a button to make the dinosaur snap its jaws, through teenagers who were already proficient with programming up to grandparents who thought they were `no good’ with computers.

“People were fascinated by the basics of programming robots, eager to learn about current research in autonomous systems, and anxious to discuss potential social and legal implications of technologies such as driverless cars.  This covered the breadth of topics that CAST researchers investigate and demonstrated how important it is to have an interdisciplinary view of the subject.”

The Lego Robots activity has developed out the Lego Rovers activity which has been successfully taken into schools in the North West for the past two years. Funding from the STFC has supported the further development of this outreach activity including bringing it to the Cheltenham Science Festival.