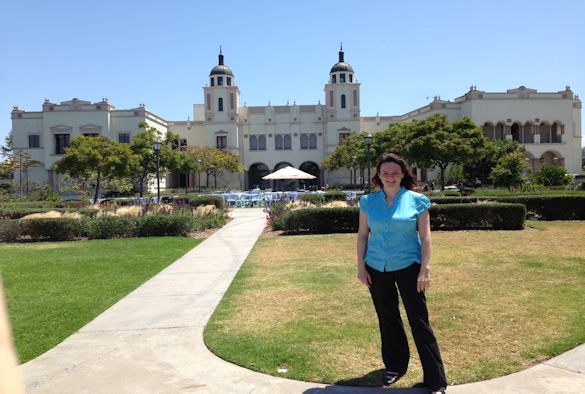 Dr Katie Atkinson, from the Department of Computer Science, was Programme Chair of the 15th International Conference on Artificial Intelligence and Law (ICAIL 2015) that recently took place in San Diego, USA.

“The ICAIL conference is a biennial event that was established in 1987. Researchers working in the field tackle the problem of how to represent the law in computer programmes and computationally model reasoning about the application of law to specific scenarios.

To take one example, suppose that a crime has been committed and two suspects each give conflicting accounts of what happened. The facts would have to be established taking into account the evidence available and witness testimonies.

The law must then be applied to decide which party, if any, should be convicted, along with a justification for this. To produce an automated system to capture all these legal concepts and reason with them requires a precise but complex theory that can be transformed into a software programme. The problem can be broken down into many inter-related sub-tasks that are addressed by researchers working in the field of Artificial Intelligence (AI) and Law.

The highlights of the 2015 edition of the conference are captured in the papers that have been recognised through the prizes awarded within different categories.

The prize for the best doctoral consortium student was on the topic of e-discovery, which is concerned with how to effectively and efficiently conduct searches through millions of legal documents for those relevant to litigation and government investigations.

The best student paper prize for the main conference was on the topic of AI models for reasoning about how to interpret statistical evidence in legal cases. The best paper prize was awarded to a contribution that set out a hybrid theory of how to combine stories about ‘what happened’ in a legal case with evidential arguments available in the case.

The innovative applications award went to a paper that showed how to detect tax law abuse by simulating the co-evolution of tax evasion schemes and their discovery through audits.

The main conference program included two contributions from the Department of Computer Science at the University of Liverpool. The first was based on the research of PhD student Latifa Al-Abdulkarim and was concerned with the evaluation of a programme that uses computational arguments to reason about the decisions (find for the plaintiff or find for the defendant) within a body of case law.

The programme has a high success rate in being able to draw the same conclusion as the judge did in the actual cases, and explain its reasoning in doing so.

The second paper from Liverpool was led by Trevor Bench-Capon and was concerned with articulating the relationships between the different legal concepts, such as issues, facts and values, that are of relevance when developing computational models of reasoning with legal cases. Details of all contributions to the conference can be found on the conference website: http://www. icail2015.org.”

The conference was hosted by Ted Sichelman at the University of San Diego School of Law and was organised in cooperation with the International Association for AI and Law (IAAIL).

At the event, Dr. Atkinson was elected to serve as President of IAAIL for the term January 2016 – December 2017.

More information about the Association and its activities can be found at: www.iaail.org.