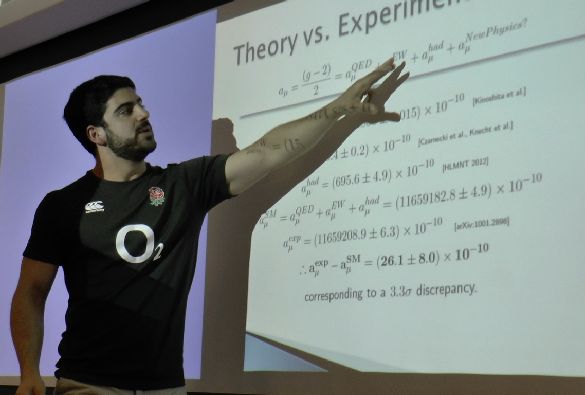 Alex Keshavarzi is a PhD student in the Department of Theoretical Physics.

“All of us can relate to the feeling of being told that we can’t do something. Almost instantly a wave of curiosity, pride, even stubbornness takes hold and there is nothing that you want to do more. That is the way I feel about modern physics.

People commonly misconceive physics as just being the study of what we know about the universe. In fact, it can be quite the opposite. It is the realisation that there is so much of how the universe works that we don’t understand that drives physicists to dedicate their lives to filling in the gaps of the structure of the incredibly complex universe that surrounds us.

The Standard Model of Particle Physics encapsulates everything, that up until this point, we accept to be our current understanding of the composition of the physical universe. But it is by no means a complete theory. And even more surprising than that, a theory it remains.

Theoretical physicists will postulate a hypothesis and if it survives under experimental scrutiny, then it becomes an accepted theory with a certain degree of error. But that doesn’t mean to say that at some point in the future someone may not disprove it or that a better, more effective theory will be obtained to replace it. All we can say at the present is that this is the most appropriate theory we have and we use that as a basis to try to better understand what we do not know.

You could almost imagine the Standard Model to be a song that is yet to be finished. You have your verse-chorus-verse-chorus-ending, but maybe you don’t know what lyrics to write that will perfectly fit over four lines of music that you’ve written for the verse, or maybe you can’t figure out what bass-line will perfectly sit underneath the chorus.

The reason that the song analogy is so relevant here is that if you did not know what lyrics would best fit the second verse but you know that the second verse is only four lines long, then four lines of lyrics is all you need to write. With physics, we rarely have this foundation, meaning we are often unsure of how much we actually don’t know.

My research, the study of the Anomalous Magnetic Moment (g-2) of the Muon, focuses on this exact problem and is a way of testing how much is missing from the Standard Model.

Fundamental particles have a property known as their magnetic moment – the measure of the strength of the magnetic source – also known as the g-factor. In 1928, Paul Dirac predicted using Quantum Electrodynamics, the theory that describes how light and matter interact, that the g-factor should exactly equal 2.

It took almost another 20 years for it to be shown that although Dirac was not wrong, there were other factors that were needed to be considered and that these fundamental particles, like the Muon, have a g-factor that differs from two ever so slightly – approximately 0.1%. This anomaly is the so-called Anomalous Magnetic Moment.

The Anomalous Magnetic Moment of the Muon is particularly interesting as it provides a stringent test of the Standard Model. The theoretical value has been calculated to extremely high accuracy and has then been experimentally measured. Even though it is one of the most precisely determined values in physics, we find that there is a discrepancy between the theoretical and experimental value.

This difference between the two could be a signal that there is physics in the universe that we are unaware of and therefore are not considering when calculating the theoretical value: Physics Beyond the Standard Model.

With this in mind, if we can improve the accuracy of our calculation of the Muon g-2 such that we can say beyond doubt that this discrepancy exists, then we are effectively saying that we know that there is a certain amount about how our universe works that we do not know – we are missing exactly four lines of the second verse.

It is only then that we can start to fill in what we are missing and try to decipher what we need to add to make up this difference and write a little bit more of our ‘song’.” 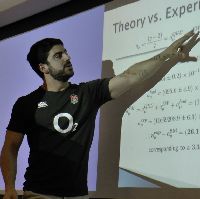