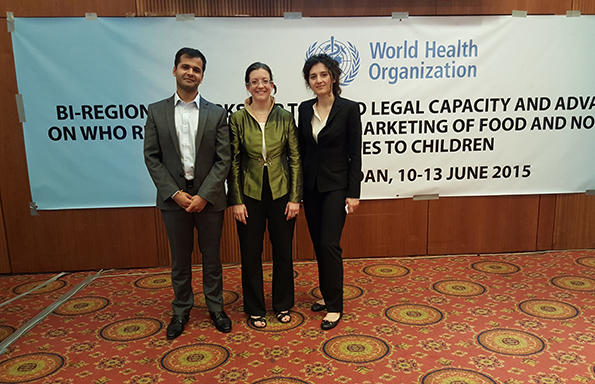 The University of Liverpool’s Head of Law, Professor Amandine Garde has developed a pioneering course to help the World Health Organisation (WHO) implement its recommendations on the marketing of foods and non-alcoholic beverages to children.

“In May 2010, the World Health Assembly endorsed WHO recommendations which clearly acknowledge the relationship between food marketing and children’s food preferences, purchase requests and consumption patterns.

It calls on member states, as part of effective overweight and obesity prevention strategies, to implement the recommendations and restrict the marketing to children of food and non-alcoholic beverages which are high in saturated fats, trans-fatty acids, free sugars, or salt.

The advantages the law offers for the development of effective public health policies are well-known: the law applies to all, it is binding; it is adopted through a democratic process; it is subject to judicial review and therefore open to legitimate challenges before courts of law; it provides for enforcement mechanisms; and is accompanied by sanctions for non-compliance.

The law, however, may also impose some constraints on WHO member states, and it is only if these constraints are well understood that the opportunities the law offers to promote healthier lifestyles can be maximised.

The first WHO workshop building legal capacity for the implementation of the recommendations took place in Amman, Jordan and was attended by 11 governments from both the East-Mediterranean and the European Regions. Three Liverpool Law School members contributed to this training initiative: Professor Amandine Garde (who designed and facilitated the course), Dr Mavluda Sattorova and Nikhil Gokani.

The course was the first event organised by the School’s Law and NCD Prevention Unit, which is to be formally launched this summer. The Unit will work to reduce the prevalence of NCDs through the effective use of legislation and other legal instruments, with a particular focus on population reduction of tobacco use, excessive alcohol consumption and consumption of unhealthy diets.