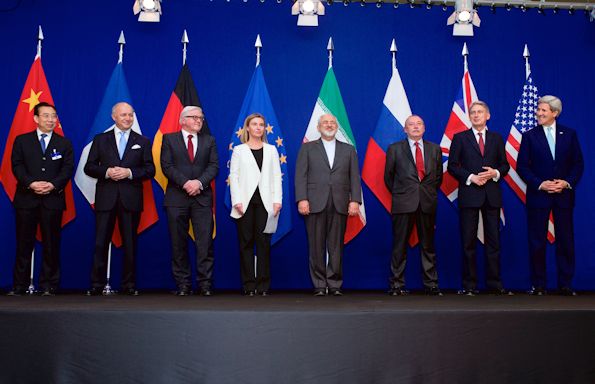 Dr Michael F Hopkins is a Senior Lecturer in American Foreign Policy in the University of Liverpool’s Department of History:

“President Barack Obama is described by both supporters and opponents as cautious. Yet this month sees two examples of bold diplomacy.

On 20 July the United States will re-open its embassy in Havana, which has been closed since Eisenhower was president. Even bolder is the deal on the Iranian nuclear programme, announced on 14 July, the result of several weeks of intense negotiations in Vienna.

The agreement is, of course, the result not just of American initiative but of negotiations between Iran and the five permanent members of the UN Security Council plus Germany, usually known as P5+1.

But, if the United States had not pressed for action, if there had been major American objections, there would not have been serious negotiations, much less a deal.

In his remarks on 14 July, Obama spoke enthusiastically, saying it tackled an important issue and in a robust way. He also emphasised its wider significance: “This deal offers an opportunity to move in a new direction. We should seize it.”

On the other hand, prime minister Benjamin Netanyahu of Israel called it “a historic mistake for the entire world.” Many Republican politicians joined in this criticism. So too have various conservative commentators.

Writing in the Washington Post on 15 July, Michael Gerson spoke of “Obama’s reckless bet.” Charles Krauthammer, in an article two weeks before the agreement was reached, described the imminent deal as the “worst agreement in US diplomatic history.” So, are Obama and Secretary of State John Kerry, who led the talks in Vienna, pursuing a wise, prudent policy or being reckless in search of a legacy?

The Joint Comprehensive Plan of Action (JCPOA), as the agreement is formally known, is a complex document, running to 159 pages. It has three main components.

First, there are restrictions on Iran’s nuclear programme: it will reduce its 20,000 centrifuges to 6,104 for the next ten years; it will cut its stockpile of enriched uranium by 96 percent to 300kg for the next fifteen years; and it will not develop further heavy water reactors for the next fifteen years. Second, the International Atomic Energy Agency (IAEA) will monitor Iran’s declared nuclear sites and verify that no fissile materials have been moved covertly to secret locations so as to build a bomb.

The IAEA will be able to seek access to military sites, but this is not automatic. If the Iranians block entry to the inspectors, the issue will go to a commission comprising eight members (US, Britain, France, China, Russia, Germany, Iran and EU), which requires the agreement of five members.

So Russian and Chinese support for Iran cannot block access, if the other five members vote for it. Third, in return for these restrictions and monitoring regime, various sanctions imposed on Iran because of its nuclear programme will be lifted, but this will only occur after the IAEA confirms that Iran is honouring its undertakings in the JCPOA.

In diplomacy you rarely get all that you want – after all, that is the essence of compromise. Have the compromises by the P5+1 team brought real benefits? Critics charge that the deal does nothing to curtail the disruptive behaviour of Iran in the region –interfering in Iraq, Lebanon and Yemen, bolstering Assad’s regime in Syria, and sponsoring terrorism. They are right, but these problems were never likely to be solved by these talks.

The central purpose of the discussions was to prevent an Iranian nuclear bomb. In order to reach the stage of substantial talks this year, the United States made two major concessions: it accepted that the Iranian programme would not be totally dismantled; and conceded that the deal would be time-limited.

The Iranians also made significant compromises: reducing their stockpile of enriched uranium by 96 per cent; and accepting monitoring by the IAEA on a level beyond its normal inspection regime. The result is an imperfect deal, which does not eradicate the Iranian programme as the Americans originally wanted. The terms of the JCPOA block the Iranians from developing a bomb for at least ten years.

For the nuclear agreement to work there needs to be a resolute commitment by the United States, in partnership with the rest of the P5+1 countries, to enforce the terms. They also must look ahead to what happens at the end of the period of the deal.

The Americans should make it abundantly clear that they will not tolerate an Iranian bomb. If the IAEA confirms that the Iranians are complying with the agreement, then sanctions will be lifted releasing up to $150 billion. There is a real fear that some of this money might then be used to aid Shiite militias and other Iranian interventions in the region. The United States should devise a strong response to such developments.

It is difficult to determine whether the agreement will bring the chance to move forward, as Obama suggests. The deal is a real success for the Iranian prime minister, Hassan Rouhani, strengthening his position in the country and perhaps allowing further efforts to engage more constructively with the West.

But the supreme leader, Ali Khamanei, takes a much narrower view, seeing it as only the settlement of one specific issue. It is far from clear how things will develop, but the nuclear deal does appear, on balance, to demonstrate prudent diplomacy by the Obama administration. But commentators would be wise to be cautious about its prospects for success, which requires a continuation of the bold commitment that led to the agreement.”

One thought on “Viewpoint: Iran nuclear deal – reckless or prudent?”