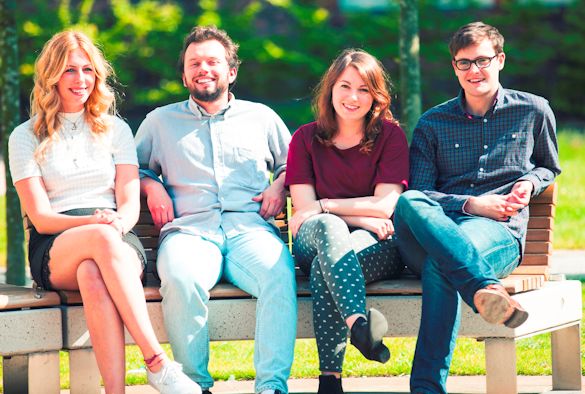 The newly elected team of Guild Officers have taken up their posts for the 2015/16 academic year.

Harry Anderson returns as Guild President for a second term. This year, he plans to focus on the roll-out of Stream Capture, as well as continuing to strengthen the Guild’s relationship with the rest of the University.

Harry is joined by Deputy President Alex Ferguson, who is also in his second year on the team. Alex’s priorities include the implementation of a nightline so that students have a place to get free, confidential support, as well as continuing to make sure students get the most suitable accommodation for their needs, He will also focus on improving the Guild’s partnership with Liverpool City Council and other local organisations.

Emma Sims, who continues in her role as Vice President from last year, will be focusing her attention on travel subsidies for students on placements and field trips, tackling sexual harassment and abuse on campus, and developing new ways for students to get involved in campaigning.

Rosie O’Donnell has joined the team for the first time this year. Rosie is tasked with making sure students who play sport or take part in large independent societies are well represented by the Guild, and hopes to improve the variety of Guild events to appeal to a wider selection of students.

Staff and students can get in touch with the Guild Officers in the following ways: