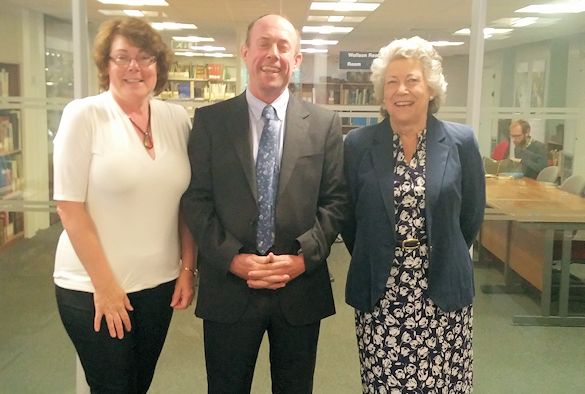 The granddaughter and great-granddaughter of Harold Cohen visited the University Library named in their grandfather’s honour this week.

Mrs Penny Gluckstein, granddaughter of Harold Cohen, and her daughter, Amanda Graves, were shown a selection of items relating to their grandfathers £100k donation to the University, which was made in 1936, leading to the building of the Harold Cohen Library. This included the pen which Harold Cohen used to sign the donation cheque and a verbatim account of the speeches made at the formal opening of the Library.

They were also given a tour of the Tate Hall in the Victoria Gallery & Museum – the location of the University’s first central library, prior to the construction of the Harold Cohen library – and of the Library Special Collections and Archives.

University Librarian, Phil Sykes, said: “It was marvellous to be able to take Penny and Amanda around the Library and show them all the material we hold about Harold Cohen. I particularly enjoyed it when Penny was able to identify several relatives and family friends from the guest list for the library opening ceremony.”

Harold Cohen was chairman of Lewis’s department store and the son of a former Lord Mayor of Liverpool. He died, tragically, on the day he was going to lay the foundation stone of the new library and have the  degree of Doctor of Laws conferred on him, in 1936. He was awarded the degree posthumously, the only posthumous award of an honorary degree in the history of the University.

The Harold Cohen Library was opened in 1938 by former prime minister Stanley Baldwin, by then Earl Baldwin. It is now home to the University’s science, medicine and engineering collections.