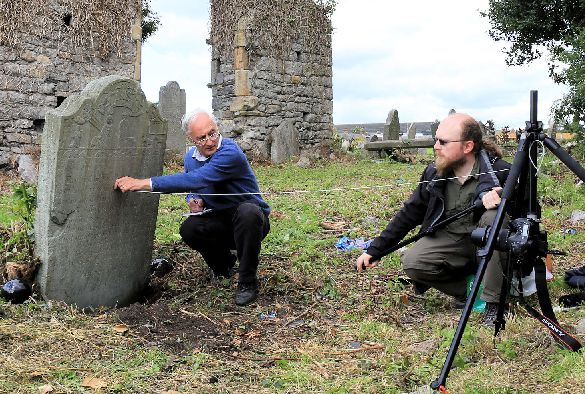 Professor Harold Mytum is researching historic memorials in Ireland, including a small group of headstones with a unique gravestone design – the Nativity.

“One example of a gravestone design of the Nativity has been identified in Cord cemetery, Drogheda, County Louth. Collaborating with the Drogheda Civic Trust, who have recently cleared the area of undergrowth to reveal the stone, I was given access to the cemetery and, with our IT technician, JR Peterson, we carried out cutting-edge Reflectance Transformation Imaging (RTI) recordings of the monument.

RTI creates images from combining data from a large number of digital photographs taken from the same point, but each with the light source in a different location. The resulting images minimise any visual distractions such as discolouration of the stone, as with the Drogheda example, or the growth of lichen, as in other examples, and allow detailed examination of carving under varied lighting conditions.

The pictures are suitable for scholarly and popular publications, and allow easy comparison of memorials located in different graveyards in a way that was previously impossible.

The research is being publicly displayed for the first time at the Drogheda Civic Trust’s public open day at the Cord cemetery on 22 August, as part of Ireland’s National Heritage Week.

The Cord cemetery is a fine example of an Irish urban cemetery, but like some others has suffered a period of neglect in recent years. The Civic Trust are doing a great job in clearing the site of heavy undergrowth, and beginning a conservation programme on the remains of the medieval friary which formed the focus for the graveyard, later converted into a cemetery. In its now-accessible state, we can contribute our research experience by carrying out archaeological surveys of the monuments, including the use of RTI.

This innovative work brings visually stunning results of the fieldwork on the Nativity stone and should excite public interest and make the wider community realise the potential for the site. The Trust is expecting a large turn-out of local people for the open day, as there has been widespread public support for the initiative. We hope the work will allow people to appreciate and value their heritage, and ensure its preservation.

The Drogheda headstone, erected soon after 1813 by Michael Toner in memory of his father and brother, is a fine example of the Nativity scene, known from just five memorials in the area, this being one of only two of this design to be signed by the carver, Patrick Corigan. The RTI allows detailed study of his carving techniques, and will also act as a permanent record of the condition of the stone in 2015 so that this can be monitored in future years.

We continue to advise the Civic Trust on cemetery management and preservation, and plan to bring students to assist with recording at Cord cemetery in 2016 as part of their field training – linking teaching, research , heritage management, and community involvement.”