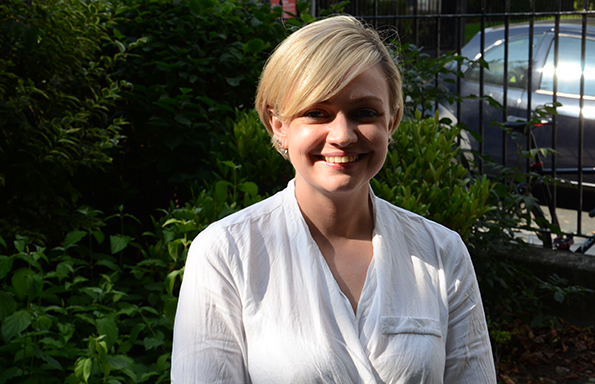 “I graduated from the University of Liverpool in 2009 with a BA (Hons) in History and Politics, and after working in accountancy for several years returned to undertake an MA in International Relations & Security. It was whilst studying for my MA that I became interested in the work being done within IR studies on human trafficking, and was fortunate to be able to commence a PhD with Dr Alex Balch, an expert in human trafficking, as my supervisor.

Having always been particularly interested in human rights, women’s studies and international development, I developed a particular focus for my research looking at the ways we think and talk about people who have been trafficked, and the effect that this has on their human rights.

For example, the traditional focus in the study of human trafficking has been on the trafficking of women for sex work, in spite of the fact that estimates show that more trafficking is for forced labour, and a significant percentage of victims are male.

Why is it then that so much of the awareness of human trafficking has focused on female victims of sex trafficking? Superficially, of course the media are always going to focus on stories that are more lurid and photogenic, but on a deeper level, do we find it easier to accept a young, female victim than a middle aged male one? To add another layer, do we find it easier to accept a simple narrative of the young girl stolen from the street than a more complicated scenario were the fine line between consent and coercion has to be considered?

”Many of those who are trafficked have agreed to involvement with their trafficker, be it to be smuggled across a border that they could not legally cross, work in a factory or for sex work. However at some point the situation became exploitative.”

Many of those who are trafficked have agreed to involvement with their trafficker, be it to be smuggled across a border that they could not legally cross, work in a factory or for sex work. However at some point the situation became exploitative, and for it to be considered trafficking the person has to be in some way held against their will, within the exploitative situation. There are problems even with this definition of trafficking, as the term is often co-opted for political reasons relating to migration.

The research aims to demonstrate a more nuanced picture of human trafficking. The findings could have significant impact if we are to drastically improve the way we attempt to combat it. Rather than treating human trafficking exclusively as an international organised crime issue, it could also become one more properly relating to migration and labour rights.

This has been in the news recently with Amnesty International proposals to officially back the decriminalisation of sex work internationally, and the response condemning this by the Coalition Against Trafficking in Women (CATW) supported by several A-list celebrities. The side of the debate one falls on determines the way in which trafficking is combatted, as it changes the perspective on who is a trafficking victim.

By investigating these issues, it is hoped that we can inform debates and lead to constructive change in the fight to combat human trafficking.”