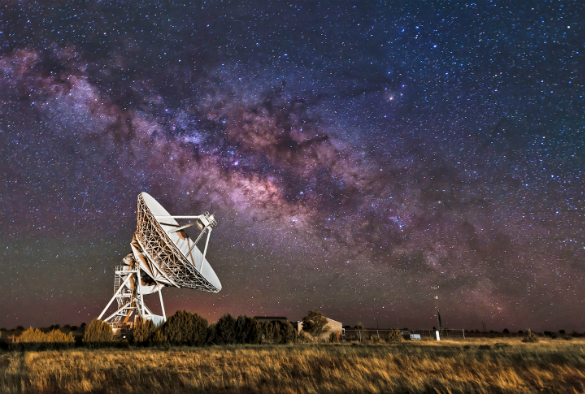 Dr Joao Pedro De Magalhaes is a Senior Lecturer in Functional and Comparative Genomics in the University of Liverpool’s Institute of Integrative Biology.

“This summer Professor Stephen Hawking launched a new venture to listen for aliens. The $100M (£64M) effort will be the biggest to date in the search for signs of extraterrestrial intelligence. Together with recently unveiled plans from UK scientists to transmit messages into space that aliens might detect, it reflects a renewed interest in ET life. Discovering whether we are alone in the universe will be one of the most exciting scientific quests of the 21st-century.

“Where is everybody?” physicist Enrico Fermi famously asked in 1950. His question provocatively implied that aliens should already be here in the solar system. You see, the Sun is a pretty average star among over 100 billion stars in our galaxy. Given such astronomical numbers, many have argued that it is statistically unlikely that life, including intelligent life, has not emerged elsewhere. Fermi calculated that extraterrestrial civilizations older than ours would have had enough time to cross our 100,000 light-year Milky Way galaxy and reach the earth. The fact that they haven’t remains a mystery known as Fermi’s Paradox.

There are a number of possible explanations to Fermi’s Paradox, including the possibility that life is incredibly rare in the universe, or that civilizations are bound to self-destruct. Or perhaps space travel is more dangerous and/or more expensive than we think. In this context, Extraterrestrial Intelligence (SETI) efforts were set up over 50 years ago to scan the skies for signs of ET civilizations.

Although no sign of extraterrestrial technology has been detected thus far, the SETI field is more active than ever. Planets in other star systems, called exoplanets, are being discovered at a rapid pace and better instruments for surveying the cosmos are being developed. New radio observatories allow researchers to search for more subtle ET signals, including radio and television signals. We may not be able to interpret alien TV shows, but we may be able to detect their existence. In addition to technological breakthroughs, renewed funding, like the Stephen Hawking-backed effort which is funded by Russian billionaire Yuri Milner, provide new impetus for SETI. The possibility of detecting extraterrestrial intelligences is being taken seriously enough for the development of protocols, involving the UN, for how we should react and possibly respond to a first contact.

Are you there yet?

SETI is a passive process of listening to as many stars as possible for as long as possible until a signal is picked up that cannot be explained by natural phenomena. It may well last centuries. An alternative involves Messaging to Extraterrestrial Intelligence (METI). If all civilizations in the galaxy are quietly listening then nobody will detect each other, and so perhaps we should transmit messages for others to detect. METI has drawn criticism, including from Hawking, because of the risks posed by revealing our location to potentially hostile extraterrestrial civilizations. Some call it “shouting at the cosmos”. Messages have been sent already, however. The first of which was the historical Arecibo Message sent in 1974 by SETI pioneers Frank Drake and Carl Sagan. In 2008, NASA beamed the Beatles’ “Across the Universe” to a distant star.

One possible explanation for Fermi’s Paradox is that extraterrestrial intelligences are aware of our existence and can reach us but have decided not to interfere in our civilization. This is known as the Zoo Hypothesis. In other words, perhaps we are in some sort of galactic reserve where aliens can observe us but will not communicate until we reach some technological or societal milestone. In particular, extraterrestrial intelligences eavesdropping on our radio frequencies, either from outside the solar system or maybe hidden somewhere in it, would be able to learn a huge amount about our civilization just by listening to our radio and watching our television broadcasts.

Although the Zoo Hypothesis is impossible to test, I recently proposed a protocol to invite any lurking extraterrestrial intelligences to engage with us. Even though it’s unlikely that anybody is indeed listening to us, this cannot be excluded and perhaps it is possible to convince ET to communicate with us soon. In fact, METI advocates have argued that issuing an invitation may be the necessary milestone for extraterrestrial intelligences to contact us. An invitation message could even be contained in our regular radio and television broadcasts. This would not only be cost-effective but would not put us in any danger – at least not any more danger than we are already in if much more advanced extraterrestrial civilizations are aware of us and can reach the earth. An open question is: how might we persuade them to communicate? Shall we ask for help or advice? Suggestions for drafting the invitation message are welcomed on our Active SETI project website.

To quote Arthur C. Clarke: “Two possibilities exist: either we are alone in the Universe or we are not. Both are equally terrifying.” Discovering extraterrestrial intelligences would have profound implications for humankind, although its impact would depend on how close they are from us. In the most tantalizing scenario aliens are already listening to us.”