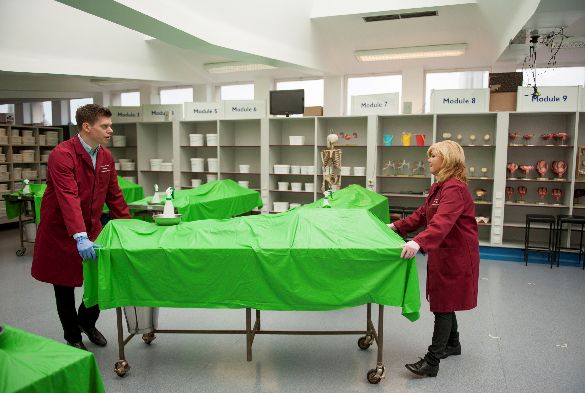 Jim Gallagher is Professor of Anatomy and Cell Biology at the University of Liverpool and featured in the Channel 5 series, ‘Body Donors.’

“If you tuned into Channel 5’s ‘Body Donors’ this month, you will have seen the experiences of staff and students at our Human Anatomy Resource Centre. The programme was a television first, following the lives of two body donors in life and in death. We spent two years working with the production company to tell the stories of two cancer patients and how their generous gift to the University benefitted the next generation of medical professionals.

We have been overwhelmed with the positive responses to the series from colleagues, students, graduates, families of donors that we have worked with in the past, and those thinking of donating their body in the future. To those of you that have contacted us about the programme in the past two weeks, thank you.

The programme gave us the opportunity to talk openly about a topic that has had a very difficult history. Looking back to the reign of Henry VIII, for example, surgeons were permitted to practice on the bodies of a number of hanged criminals each year. Dissection in the 16th century was considered to be part of the punishment for executed criminals and it remained so throughout the 17th and 18th centuries.

It wasn’t until around the time of Queen Victoria that the ‘rules’ around studying human remains became stricter. There were a small number of bodies legally available to students studying medicine in London, but with the numbers of students reaching almost a thousand, there were not enough bodies to educate them properly.

As a result, the demand for body donors increased and grave-robbing became common, leading some respectable medical professionals into illegal and dangerous territory with the Victorian criminal underworld.

In 1832 the Anatomy Act was passed, making the bodies of those who had died in the work houses available to the medical professions, which, although more regulated than before, presented many legal, ethical and, at the time, religious issues.

Today of course the process of body donation is entirely different; it is the choice of each and every individual and is highly regulated. The first contact that our donors make with the University is usually with our bequeathal secretary, Dee Tully, who liaises with a potential donor to provide them with all the information they need about donating their body to medical science.

Once the deceased has arrived at the University, the donor is placed into the care of our technical team. Our Technical Manager, Lynne Jones, runs a dedicated team of mortuary staff who ensure that the maximum educational and research benefits are gained from every donation.

Our students meet the donor in their first year and this is a carefully managed process to ensure students are supported with the impact this can have on them and to help them get the most out of their time with a donor. They work in small groups to learn about the tissues of the body including skin, muscle, organs and skeleton.

Many of the general practitioners and hospital consultants who care for our donors during their lifetime, especially in Merseyside and the north west of England, will have trained here at the University, but you will also find Liverpool medical graduates all over the UK and abroad.

Aside from teaching, body donation makes a significant contribution to research. When our donors first contact us, many of them express the desire to leave their bodies to research. The best way I can illustrate the importance of bequeathal is to tell you about a research programme that I have been involved in.

It started less than ten years ago when a patient with a rare disease donated their body to the University. This donation started off a whole new area of research which has led to Liverpool becoming the international centre for research in a disease, known as AKU, and to a clinical trial being co-ordinated from here for which we have great hopes for a positive outcome.

Although AKU is a very rare disease, by investigating AKU bones and joints and comparing them with joint tissue from our other donors we have discovered some new information about a much more common disease, osteoarthritis.

For those of you who have watched the documentary, we hope that it showed the professionalism of our HARC staff in their care for our donors, and the enthusiasm of our talented students who make the University’s Human Anatomy Resource Centre a very special place to work.

Body donation is not the taboo subject it once was, but still divides opinion. The experience of making the programme, however, has allowed us, for the first time, to inform people fully about the process of donation and it has opened up a valuable public discussion that we wouldn’t have thought possible prior to the programme going out.

Most of all, we wanted this film to show how grateful we are to our donors and their families who chose to make such a remarkable gift to society.”