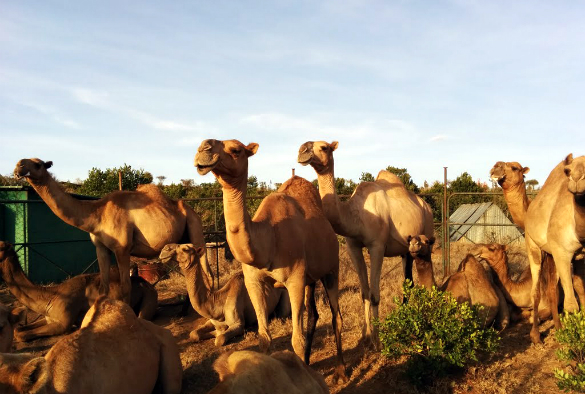 A new study has found that nearly half of camels in parts of Kenya have been infected by the virus that causes Middle East Respiratory Syndrome (MERS) and calls for further research into the role they might play in the transmission of this emerging disease to humans.

MERS was first identified in Saudi Arabia in 2012 and there is currently no vaccine or specific treatment available. To date, it has infected 1,589 people in more than 20 countries and caused 567 deaths. Although the majority of human cases of MERS have been attributed to human-to-human infections, camels are likely to be a major reservoir host for the virus and an animal source of MERS infection in humans.

A team of scientists from the University of Liverpool and institutions in the USA, Kenya and Europe, surveyed 335 dromedary – single humped – camels from nine herds in Laikipia County, Kenya and found that 47% tested positive for MERS antibodies, showing they had been exposed to the virus.

Similar to the common cold

Professor Eric Fèvre, Chair of Veterinary Infectious Diseases at the University’s Institute of Infection and Global Health said: “Although Laikipia County camel density is low relative to more northern regions of Kenya, our study suggests the population is sufficient to maintain high rates of viral transmission and that camels may be constantly re-infected and serve as long term carriers of the virus. MERS in camels, it seems, is much like being infected by the common cold.

“The significance of this is not yet clear, because we don’t know if the virus is universally zoonotic. While the risk of these camels spreading MERS to humans cannot yet be discounted, it appears to be, for now, very low as there have been no human cases diagnosed in Kenya.

“It might be that the mutations required to make this virus zoonotic have only evolved recently in the Middle East, where the human outbreaks have so far been concentrated.”

Lead author Dr Sharon Deem, Director of the Saint Louis Zoo Institute for Conservation Medicine, said: “Demand for livestock products, such as meat and milk, is rising across the globe and could offer poor farmers a route out of poverty as markets expand, but zoonotic disease remains a major obstacle to this goal.

“Further research to determine whether the MERS virus is dangerous to humans in Kenya and other sub-Saharan countries is critical.”

The study is published in PLOS ONE and was funded by the Saint Louis Zoo Field Research for Conservation Grant, the Wellcome Trust and the CGIAR Research Program for Agriculture for Nutrition and Health.

Find out more
’Why studying African camels is key to learning more about the MERS virus’ – Read Professor Eric Fèvre’s article for The Conversation Africa here.