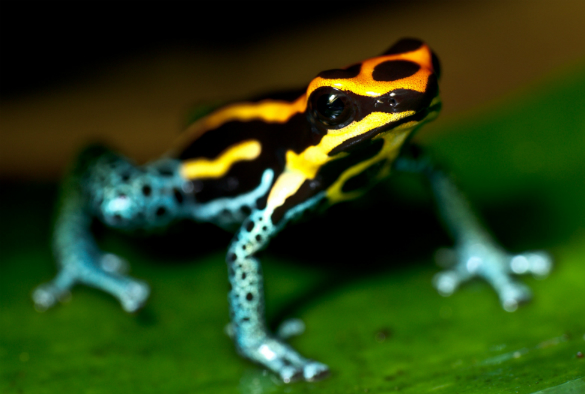 Scientists at the University of Liverpool have found that amphibians that use toxins to protect themselves against predators are at a higher risk of extinction than those who use other types of defence, which poses a challenge to a long-held evolutionary hypothesis.

As part of nature’s evolutionary arms race, animals have evolved a whole host of different defence mechanisms, including chemical defences, such as poisons or irritants, camouflage, warning colouration and mimicry.

The way mechanisms deter predators has been well studied, but little is known about how they impact upon larger evolutionary processes such as speciation – the formation of new species – and extinction.

First of its kind

In contrast, the use of warning colouration and mimicry was associated with higher rates of speciation, but unchanged rates of extinction.

Lead author Dr Kevin Arbuckle, from the University’s Institute of Integrative Biology, said: “There are a number of plausible reasons why the use of chemical defence might lead to higher extinction rates. For example, it could be that there is trade off which leaves prey vulnerable to other kinds of enemies, such as infectious diseases, but we don’t yet understand what drives the relationship.”

The results of the study, which is published in the Proceedings of the National Academy of Sciences, are only partially consistent with a long-held evolutionary hypothesis, called ‘escape-and-radiate’, which predicts that effective defences let prey ‘escape’ from predators and diversify into many different species in the process.

Dr Arbuckle added: “We’ve shown that this hypothesis, which is widely cited and used, requires some revision because of its failure to account for the effects of extinction rates. We propose that ‘escape-and-radiate’ should be seen as just one part of a more general hypothesis for the macroevolutionary effects of antipredator defence that includes both speciation and extinction.”

“In addition, our findings could help support the conservation of endangered species by allowing some predictability of extinction risk from knowledge of antipredator defences. Amphibians are a key example of this as they have suffered population declines worldwide, including many of the iconic poison-dart frogs.”