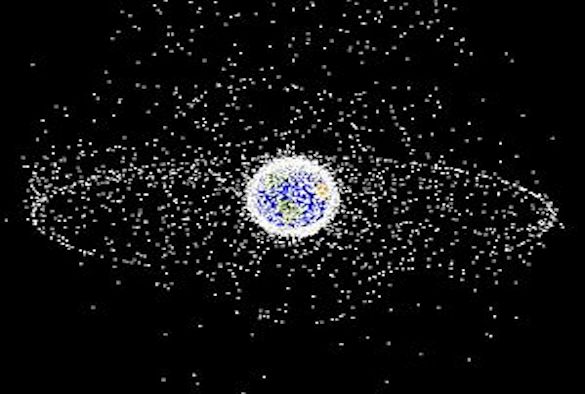 Researchers from the University of Liverpool are using strategic game theory to analyse the accumulation of space debris, and to assess removal efforts and mitigation measures to limit its growth.

Space debris is non-manoeuvrable, human-made objects which orbit the Earth which poses a significant collision risk for operational spacecraft, especially in low-Earth orbit.

A collision with a piece of space debris of about ten centimetre in diameter would cause a spacecraft to disintegrate resulting in more space debris fragments,  which in turn increases collision risk.

The build-up of space debris could eventually result in a catastrophic cascade of collisions, called the Kessler syndrome.  Currently, there are more than 23,000 objects larger than 5-10cm in Earth’s orbit.

Supported by the European Space Agency (ESA), University Computer Scientists will develop theoretical models to study the accrual and removal of space debris as well as assess the different policies and actions that could be used to limit its growth.

Game theory is an economical theory that models interactions between rational agents as games of two or more players that can choose from a set of strategies and the corresponding preferences.  It is the mathematical study of interactive decision making in the sense that the agents involved in the decisions take into account their own choices and those of others.

Choices are determined by stable preferences concerning the outcomes of their possible decisions and agents act strategically, in other words, they take into account the relation between their own choices and the decisions of other agents. Different economical situations lead to different rational strategies for the players involved.

Professor Karl Tuyls who is leading the project said: “We will be using game theory techniques to model debris accumulation and active removal efforts from space agencies and governments as a dynamic game, to determine optimal behaviour assuming both cooperative and self-interested parties, and hopefully to propose a mechanism to steer the behaviour of these involved parties to a desirable outcome.

“Space debris accumulation has become a critical problem that can potentially affect all of us, not just governments, space agencies and industry.”

Professor Tuyls added: “It is expected that this study will provide a deeper understanding of the space debris problem and its potential economic ramifications, and will provide an insight into the use of game theory solution strategies to address complex real-life issues.”

The ESA is investing in mission concepts to clean up and deorbit space debris. Removing active debris represents a number of technical complex challenges as well as being a very costly undertaking.