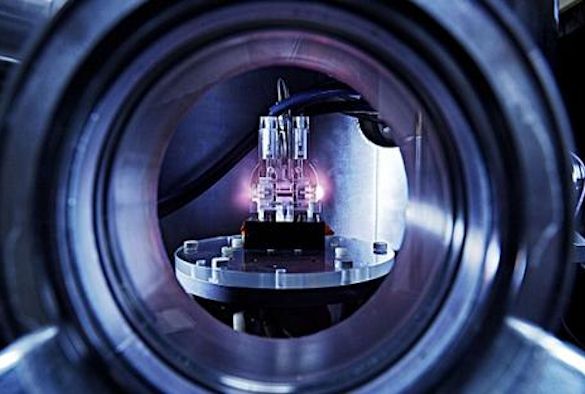 The University of Liverpool is part of a £3M European research consortium to develop a novel plasma particle accelerator.

Funded by the Horizon2020 program, the European Plasma Research Accelerator with eXcellence In Applications (EuPRAXIA ) will produce a design study for a European plasma research accelerator focussing on applications of the new technology.

Plasma acceleration has the potential to shrink costs and size of particle accelerators for science, medical applications and industry significantly.

Through Professor Carsten P. Welsch from the University’s Department of Physics and his team, based at the Cockcroft Institute, they will study the diagnostics required to monitor the shot-to-shot operation of plasma structures and contribute to the diagnostic of wakefield structures and electron beams.

Professor Welsch said: “EuPRAXIA will define the missing step towards a new generation of plasma accelerators with the potential for dramatically reduced size and cost.  It will ensure that Europe is kept at the forefront of accelerator-based science and applications.”

The EuPRAXIA consortium includes 16 laboratories and universities from five EU member states. In addition, it includes 18 associated partners from eight countries, involving leading institutes in the EU, Japan, China and the United States.

Particle accelerators have evolved over the last 90 years into powerful and versatile machines for discoveries and applications.  Today some 30,000 accelerators are operated around the world, among those some of the largest machines built by human mankind.

A new technology for particle acceleration has emerged and has demonstrated accelerating fields a thousand times beyond those presently used: Plasma acceleration uses electrically charged plasmas, generated by strong lasers, instead of the usual radio frequency used in conventional accelerators, to boost particles like electrons to high energies.

By the end of 2019, EuPRAXIA will produce a conceptual design report for the worldwide first five Giga-Electronvolts plasma-based accelerator with industrial beam quality and dedicated user areas.

EuPRAXIA is the required intermediate step between proof-of-principle experiments and versatile ultra-compact accelerators for industry, medicine or science, e.g. at the energy front of particle physics as a plasma linear collider.

The study will design accelerator technology, laser systems and feedbacks for improving the quality of plasma-accelerated electron beams. Two user areas will be developed for a novel free-electron laser and for high-energy physics.

An implementation model will be proposed, including a comparative study of possible sites in Europe, a cost estimate and a model for distributed construction but installation at one central site. As a new large research infrastructure, EuPRAXIA would place Europe at the forefront of the development of novel accelerators driven by the world’s most powerful lasers from European industry in the 2020’s.

To find out more about the project visit http://www.eupraxia-project.eu.