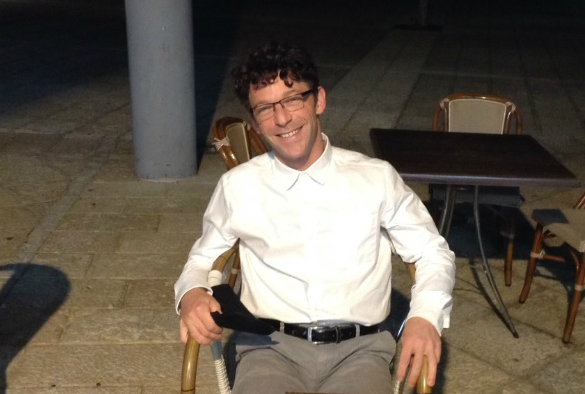 Dr Raphael Levy is a Senior Lecturer in the University of Liverpool’s Institute of Integrative Biology.

“I sat next to the taxi driver. We started talking. The ride from my hotel on Ben Yehuda Street in down town Tel Aviv to the Bar Ilan campus takes about 45 minutes. ‘Liverpool’, the taxi driver said, ‘I was there several times in the 1950s; I was a sailor.’

I was sufficiently intrigued to ask him his age. ’80 in six months,’ was his reply. He, who was older than his country, had no shortage of stories and the 45 minutes went quickly. When the Suez crisis broke in 1956, he was in Odessa, Soviet Union, on a tanker ship supposed to bring coal to Israel. I also learnt that Russia is 800 times larger than Israel.

I had spent the previous three days at Tel Aviv University, closer to the city centre, starting the week (on Sunday, of course) by giving a seminar in the Centre for Nanoscience and Nanotechnology. In Bar Ilan, I visited and gave a seminar at BINA, the Institute for Nanotechnology and Advanced Materials. The aim of my 10 day visit, funded by the British Council, is to develop scientific collaborations with Israeli colleagues and so, beyond taxi drivers, I met biologists, physicists and chemists working on areas more or less related to my own research interests, i.e. the preparation of nanoparticles and their applications in biology, especially for imaging of biomolecules and tracking of cells.

The discussions, prompted by my somewhat provocative, or ‘iconoclastic’ as one distinguished Israeli colleague put it, seminar were not limited to nanoscience but extended to the reproducibility crisis, changes in the scientific publishing landscape, and the opportunities that the internet offers to improve the way we do science by increasing the sharing of ideas (including critiques) and the sharing of data. The tree of knowledge and electronics, by Asaf Lifshitz, at the Technion campus.

This week, I complete my journey by visiting a third major Israeli institution, and giving two more seminars, at the Technion, situated in Haifa, also on the coast, an hour by train North of Tel Aviv. The stunning campus is decorated by a number of sculptures. The first seminar takes place in the Institute of Biomedical Engineering and the second in Chemical Engineering.

During these ten days I will have met over 50 scientists at different stages of their careers and I hope that there will be some lasting links; maybe one of the younger ones will join my lab in Liverpool, or, an international collaborative project will take shape with more established colleagues? Whatever happens, if I go again, I’ll send you another postcard from Israel.”