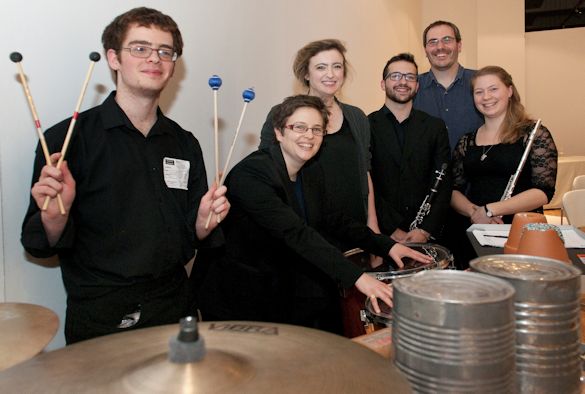 University of Liverpool Leverhulme Artist in Residence, Dr Emily Howard, celebrated the Victorian computer pioneer, Ada Lovelace, with an evening of music and discussion at the Science Museum in London.

Ada Lovelace was a nineteenth century mathematician who is considered to have written instructions for the first computer program in the mid-1800s.

A packed audience listened to a performance of Dr Howard’s own composition `Ada sketches’ given by students from the Royal Northern College of Music.

‘Ada sketches’ is an opera scena for mezzo-soprano (Ada) and chamber ensemble (flute, clarinet and percussion). It features Ada working on the solution to a mathematical computation as outlined in her own 1842 Notes on the Analytical Engine. As she makes her discoveries, the instrumental ensemble becomes a musical embodiment of the engine and Ada’s own vision that the engine might ‘turn numbers into notes’.

Dr Howard was joined by Lasse Rempe-Gillen, Liverpool Professor of Pure Mathematics, for a lively discussion with the audience about how the worlds of mathematics and music intertwine. Guests were also given the opportunity to produce their own music from mathematics.

Dr Howard said: “My interest in Ada Lovelace stems in part from my own background in mathematics and computer science. Lovelace’s visionary contributions in combination with her complex personality and position in history, make her life and work an intensely rich subject to draw upon musically and dramatically. I was delighted to be involved in such an innovative and creative evening at the Science Museum”

Dr Emily Howard, an Oxford University graduate in Mathematics and Computer Science, took up her residency as the Leverhulme Artist in Residence in the Department of Mathematical Sciences earlier this year.

She is an award-winning composer and has composed several pieces influenced by the life and work of Ada Lovelace including Calculus of the Nervous System for large orchestra and Mesmerism for solo piano and chamber orchestra.

Events will be held later this month at the University to explore the creative processes employed by both scientists and artists in their research and culminating in an evening event: Points of Convergence: Music meets Mathematics at the Foresight Centre.

Further details about the events can be found at this webpage.

Ada sketches will be performed again on 30th November  at the Mathematical Institute in Oxford. For further information visit this webpage