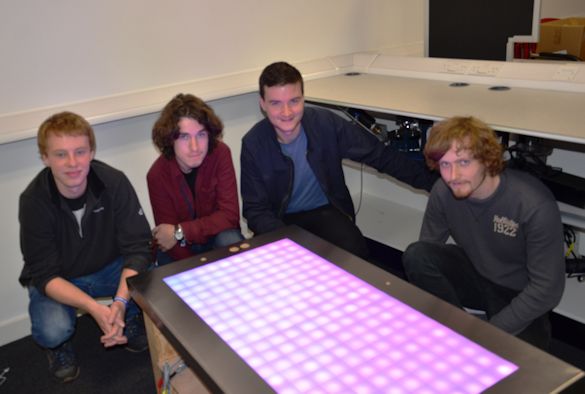 Four students from the Department of Physics have completed the prototype of an LED Entertainment Table which has the potential to provide a new approach to leisure and entertainment.

The idea was the winning entry of a Dragon’s Den competition organised by the department  earlier this year.

The LED Entertainment Table is an interactive platform resembling an ordinary coffee table lit by an  LED matrix where people can upload their favourite games such as Tetris and Snake, as well as music and a range of visual effects.  It can connect to a webcam and it can be used to respond to music using an equaliser display.

The students had a social setting in mind when they have been developing it but it has the potential to be used in many other settings for example in office waiting rooms, or home gaming rooms. The table can also be designed with different level of resolution and different sized features so the possibilities are endless.

It uses an Arduino micro-controller, an open-source electronic prototyping platform which creates interactive electronic objects and is controlled by Raspberry Pi, a computing learning platform.

To develop the prototype the students had to acquire programming and application control knowledge and they even managed to write a new piece of coding specifically designed to transfer a computer program to the LEDs as a string of RGB numbers.

Dr Marco Palumbo, Commercial Manager in the Department of Physics, said: “This team always had a good handle on the commercialisation of their idea. What has impressed me this time around is their project management skills, especially considering their young age. They knew what they wanted and executed it all on time and on budget.

“I am sure there are people out there itching to try the LED Table out and I am looking forward to see it on sale in all of the best shops. Investors interested in riding the next wave of digital entertainment and socialisation platforms should definitely get in touch with these guys!”

Conor Whitley said: “I really enjoyed developing the prototype and I am proud of our new product.  Working on the prototype was very different to academic work: the main difference being that there isn’t an answer sheet! I learnt a lot about programming electronics over a short period of time, which has given me an appreciation on how complicated electronics is”.

Huw Shiel added: “I really enjoyed the project and was amazed at the amount of support and encouragement we received from the University. It’s been a really interesting insight into the world of Physics beyond education.”

The next stage for the students is to trial the LED table in a real social environment, and they hope to partner with a local bar to do this.