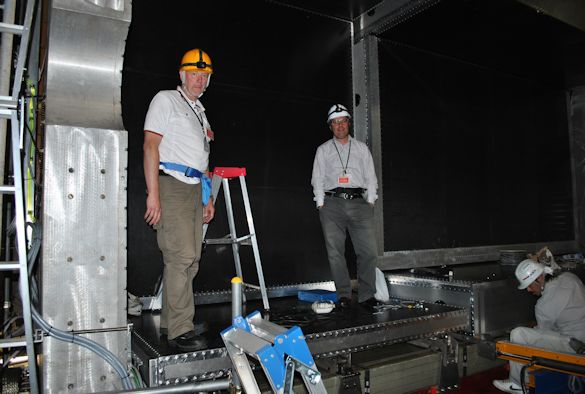 The University’s Department of Physics is celebrating as they share in the prestigious $3 million Breakthrough Prize for Fundamental Physics awarded to researchers for the discovery and study of neutrino oscillation.

The prize was awarded to five international research collaborations (comprising 1,300 researchers), including the T2K (Tokai to Kamioka) experiment  which the University’s neutrino research group is a member of.

T2K is a long-baseline neutrino experiment in Japan which is studying neutrino oscillations.  A significant portion of the T2K experiment was produced with leadership from Liverpool and it was constructed in the Physics research facilities in the Oliver Lodge Laboratories, by a team including a number of undergraduate students.

Breakthrough prizes – once referred to as ‘The Oscars Of Science’ – were set up by the Russian billionaire Yuri Milner and a host of Silicon Valley entrepreneurs, including Facebook’s Mark Zuckerberg and Google’s Sergey Brin, to honour the world’s greatest scientists and their discoveries in the fields of mathematical sciences, life sciences and fundamental physics.

The Liverpool neutrino group is already working on the next generation of experiments, which will search for matter-antimatter asymmetries and could elucidate the origin of the matter dominance in our universe.

Professor Themis Bowcock, Head of Particle Physics at the University, said: “Neutrino physics only started at Liverpool 12 years ago, with strong backing by the University. The award of this prize to members of our team is a very proud moment for all of us. We are now planning the next generation of experiments that should bring even greater physics rewards.”

Professor Christos Touramanis, Head of Physics, said: “This award recognizes neutrino physics and acknowledges that Physics is a global enterprise and it takes hundreds, if not thousands, to collectively reveal Nature’s wonders and open up new vistas to the cosmos.

“Congratulations to the team in the Department, and particularly to Dr McCauley, head of the neutrino group who as member of the T2K and SNO collaborations is getting a double citation and share!

“This award comes hot on the heels of this year’s Nobel Prize in Physics to Kajita and McDonald for the discovery of neutrino oscillations making it a banner year for neutrino physics.”

Below: Dr Neil McCauley with postdocs and students in the Oliver Lodge facilities during the construction of one of the modules