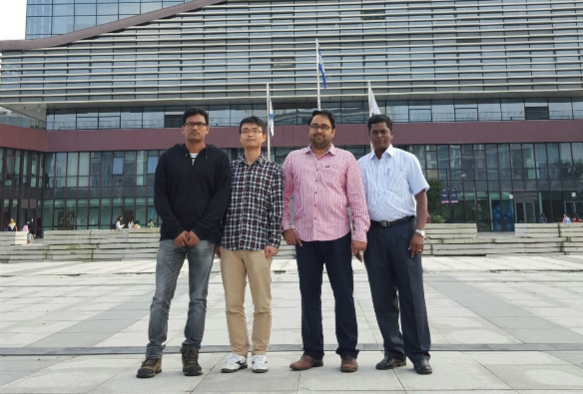 Dr Sabeel Valappil is a Lecturer in the University of Liverpool’s Department of Health Services Research and School of Dentistry, within the Institute of Psychology, Health and Society.

“Funded by a Santander travel grant, I recently visited Xi’an Jiaotong-Liverpool University (XJTLU) in China. My visit was hosted by Dr Sekar Raju, who is an Associate Professor in the Department of Biological Sciences at XJTLU.

During my visit I delivered a lecture on ‘Gallium based antibacterial materials and its applications’ to the department’s staff and students.

The high prevalence of antibiotic resistance among bacteria in recent times has become a global public health issue. The shortage of development of new antibiotics has resulted in the search for alternative strategies to combat infections caused by so-called ‘superbugs’.

Gallium has recently emerged as a new generation antibacterial ion that may be useful in dealing with pathogenic bacteria as it has an altered mode of antibacterial action which affects the bacteria at multiple sites.

My research group has been looking into the development of novel biocompatible antibacterial agents and controlled delivery systems. We are pioneering work in the UK on developing gallium for antibacterial applications and have already attracted funding from various sources including British Council.

The lecture was well received and some students showed interest in pursuing research in this field. Discussions also took place with academic staff, in particular with my host, Dr Sekar Raju, whose expertise includes detection of antibiotic resistant bacteria (ARB) and resistance genes (ARGs) in aquatic environments.

During the visit we initiated a collaboration and knowledge transfer between the two institutions, which will seek to further develop antibacterial gallium based materials to treat biofilm formation by waterborne bacteria in controlled laboratory conditions.”