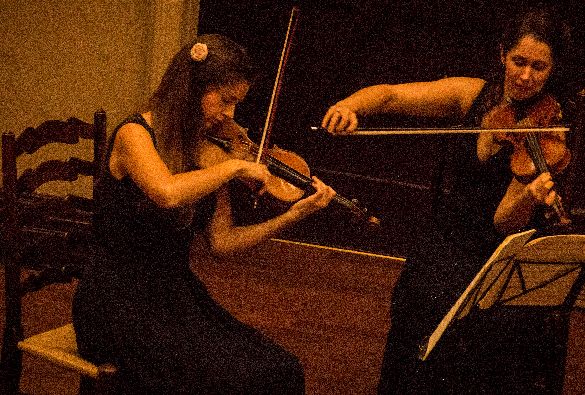 School of The Arts student, Richard Bond, gives his thoughts on the School of Music’s lunchtime concert series:

The collective intake of breath in the Leggate Theatre was almost audible at the news that the Solem Quartet would be performing a piece by the 20th Century composer Anton Webern.

Renowned for his challenging serialist and highly dissonant compositions, Webern was at the forefront of the charge into atonality after the ‘emancipation of dissonance’ of 1926 as dramatised by his contemporary Arnold Schoenburg in his essay “Opinion or Insight”. Along with Anton Berg, these three composers formed the Second Viennese School and marked an important shift in western classical music history.

For many members of the audience, memories of previous uncomfortable encounters with Webern’s work came flooding back. However, these fears were unfounded; instead, we were treated to his lesser-known Langsam Satz from 1905, dramatised by ‘beautiful, long-breathed tonal melodies’ (McKenzie, 1967, pp.148-149) in an almost late Romantic style.

In-keeping with Romantic style, the Solem quartet’s rendition over-brimmed with emotion, the luscious harmonies full of a sense of longing mimicked by the performers’ facial expressions and actions. Webern’s writing here exhibits a balanced use of a combination of legato, or smoothly linked, passages and pizzicato indications (asking the player to pluck the string with their finger). Indeed, during the performance audience members had these techniques explained to them by Viola player, Alistair Vennart.

It appears this desire to educate and share in their expert knowledge pervades all aspects of the ensemble. Speaking with them afterwards, they spoke warmly of the charity Live Music Now (for whom they now perform and are members) which aims to provide the experience of live music to those who, for a variety of reasons, have ‘rarely, if ever, had the opportunity to experience live music – some of whom are very disadvantaged.’

The second piece on the programme was Beethoven’s String Quartet in Eb, op.74, more colloquially known as the ‘harp’ quartet owing to its pizzicato, harp-like sections.

Beethoven’s name has become synonymous with the descending four note musical figure found at the opening of his 5th Symphony ‘Victory’, and indeed the Quartet highlighted that this piece (written around the same time as Beethoven’s 5th) is reminiscent of its symphonic grandeur. The harp quartet, for example, contains descending musical figures which arguably reference those of the opening motif from the 5th.

The Solem Quartet’s performance was full of energy and extremely engaging both sonically and visibly, with the piece dramatised by a strong emphasis on Beethoven’s characteristically heavy accents and close attention paid to the dynamic subtleties found in the piece.

It is clear that these musicians are an exciting new proposition in the world of chamber ensemble music, having already secured a live session for InTune on BBC Radio 3 in September of 2014 performing this same piece.

Homogenous in action and purpose, the players expertly crafted a thoroughly engaging and compelling performance of both the Webern and the Beethoven and offered an enjoyable contribution to the exciting revamped Lunchtime Concert Series, which has been moving from strength to strength over the last few months.