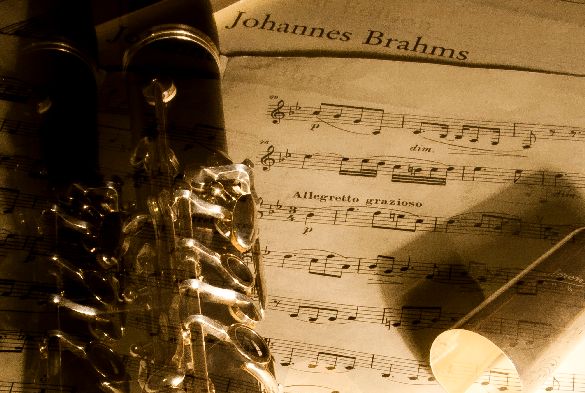 School of the Arts student, Richard Bond, gives his view on the 50th anniversary celebrations in the Department of Music.

“The lunchtime concert to celebrate the 50th anniversary of the University of Liverpool’s Department of Music, was suitably forward-looking in its reach whilst also respectful of the enormous heritage of classical music.

It aptly included the premier of a piece by former undergraduate and current masters student, Andrew Graley, titled Inharmonic Flux. This was paired with Brahms’s Clarinet Quintet, Op. 115 from 1891, a stalwart composer in the canon of classical music.

The performers were drawn from the Liverpool Philharmonic Orchestra and the concert acted as a celebration of its close ties with the University’s music department.

Andrew said: “The Department of Music embraces the full spectrum of music and encourages students to think beyond the norm.

“Composition students are encouraged to use their imagination and to explore ideas whilst recognising the immense heritage of pre 21st century western classical music.

The compositional workshops in conjunction with the R.L.P.O. are a fantastic opportunity for students to hear their pieces and to receive feedback from the players.”

The programme notes for the Brahms quintet illustrate how Brahms appears to pay homage to the Clarinet Quintet by Mozart written in 1789. Indeed Brahms’s opening melodic phrase immediately calls to mind the emphatic opening heard in Mozart, with the Clarinet leading the string quartet with a rising arpeggio figure.

After this almost classical sounding opening, however, we soon enter the familiar Romantic territory that Brahms is famous for; luscious harmonic washes over which the Clarinet soars with a typically passionate melody.

Thomas Verity, the solo Clarinettist in the performance offered a sensitive and convincing rendition fully exploring the wide dynamic and expressive indications that Brahms is known for, whilst the string quartet provided a solid accompaniment.

Sonically, the contrast heard in Graley’s Inharmonic Flux compared to the Brahms was stark despite both composers use of a string quartet to realise their compositions. In this distinctly modern piece, Graley seems to explore the sound and timbre of the piano, observing each note and accompanying clusters as independent sonic events which slowly begin to collapse into dissonance.

Calm and focus is disrupted and sprawls into chaos and noise. The players from the Philharmonic really brought unpredictable life and excitement to this piece, masterfully capturing the different moods evoked by the music. Extremes in dynamics and timbral quality helped engage the audience as the piece brought them on a journey in sound, exploring the phenomenon of a single pitch sounded on the piano and the hidden yet inherent instability of this as a single musical event.

Overall, Andrew’s composition was totally absorbing and highly effective, receiving a suitably warm round of applause from the audience, who he hopes to share more projects with in the New Year.

Andrew added: “I am currently working with three other postgraduate students on a composition for a silent film. This will be performed at the Open Circuit festival next year; an ensemble will perform live at the screening in FACT cinema, Liverpool.

“I am also composing for solo trombone and electronics. Inspiration is taken from the recordings taken by various instruments on NASA’s Voyager II spacecraft as it passed by Jupiter and one of its moons in 1979.”