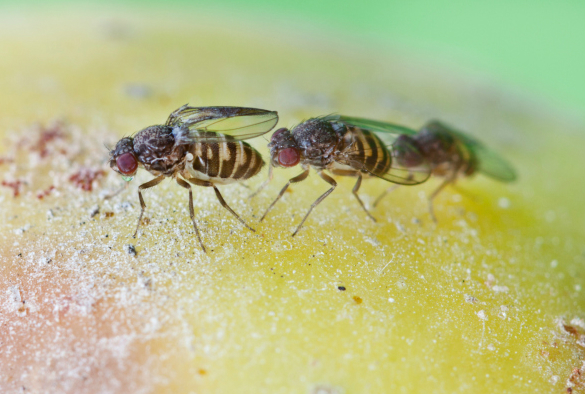 Male fruit flies could find their chances of fathering offspring radically reduced if they are last in the queue to mate with promiscuous females before winter arrives, according to new University of Liverpool research.

Usually, when female flies mate with multiple males, the last male fathers most of the offspring, with several other males fathering the rest. However, scientists have found that the outcome of this ‘sperm competition’ reverses when mating takes place prior to winter hibernation, with only the first male fathering any offspring.

In the wild, females of many species can store sperm in their bodies for months before fertilisation takes place, often during periods of environmental stress, such as cold winters.

The team, in collaboration with the Universities of Exeter and Vienna, examined the outcome of long term sperm storage in the fruit fly Drosophila pseudoobscura, by simulating the conditions in which females survive over winter.

In a controlled experiment, virgin females were mated with two males each, and then stored for up to 120 days at 4°C. The outcome of sperm competition was consistent when sperm was stored for 0, 1 or 30 days, with the second male fathering most of the offspring.

However, when females were stored in the cold for 120 days, the second male fathered less than 5% of the offspring. Moreover, when sperm were stored long term the first male fathered almost all offspring, even when carrying a genetic disease that usually reduces their reproductive success.

Evolutionary biologist Dr Tom Price, from the University’s Institute of Integrative Biology, who led the study said: “While further work is needed to establish exactly why this occurs, we suspect that the female stores sperm from the first male in a storage organ that offers protection against the cold, while subsequent sperm are stored elsewhere and get killed off by the drop in temperature.”

Long term survival of sperm over cold, hot or dry periods could explain some of the puzzling variation seen in sperm and sperm storage across the natural world.

Dr Price added: “Sperm cells can range in size from 0.0005cm in humans to 5cm in some flies, and females of different species have really diverse ways of storing sperm, but we don’t understand why. Existing sperm competition research has focused on short term sperm storage, so may have missed a key process driving the evolution of sperm and sperm stores.”

Additionally, the observation that promiscuous females become effectively monogamous when winters get cold enough could impact on some pest control strategies.

Dr Price explained: “One of the best methods for controlling serious pest insects is the sterile male technique, which sees laboratory-bred sterile males released to mate with wild females. The problem in promiscuous species, however, is that females can just continue to mate until they find a fertile male, so the technique fails.

“Our finding suggests that releasing sterile males just before winter could prevent this, as provided a female mates with a sterile male first then no offspring will be produced the following spring. As males normally don’t survive winter, this means the pest population can be dramatically reduced.”

‘The Winter is Coming: hibernation reverses the outcome of sperm competition in a fly’ is published in the Journal of Evolutionary Biology.