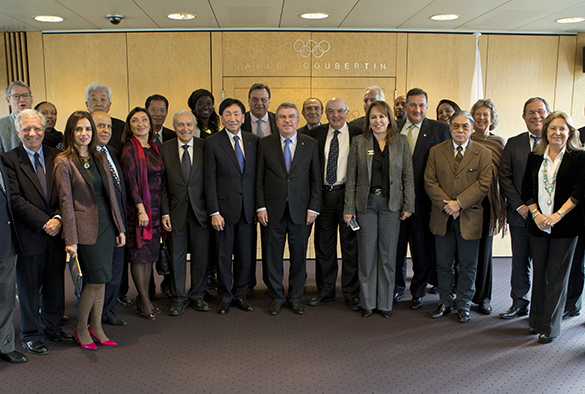 “After 15 years observing, analysing and offering a critique of the International Olympic Committee Culture and Education Commission, I am now formally part of this highly select group. The Commission has just been revamped to focus on Culture and Heritage, with an emphasis on the role the arts, culture and creativity can play to provide a context, inspiration or response to the world of sport. A separate Education Commission has also been created to focus on sport and Olympic education related matters.

It is a pleasure and a privilege to join in an expert capacity alongside Tony Hall (BBC Director General), and Martin Roth (Director of the Victoria and Albert Museum). Other long established members represent the Olympic Movement and include IOC members such as Princess Nora of Liechtestein, the President of the International Olympic Academy in Ancient Olympia and a range of National Olympic Committee Presidents. Combined, members of the Commission represent over 22 different countries as well as several international associations.

This is an important time to advance a clear cultural strategy for the Olympic Movement as well as provide stronger referents for cultural policy-making within the Olympic Games. The Olympic Agenda 2020 provides a specific time frame for strategic delivery, while ongoing demand for accountability, transparency, as well as sustainable and meaningful legacies in mega-event hosting-processes make the cultural question an irrefutable imperative.

After 100 years struggling at the margins, it is no longer feasible to host a successful and widely owned Olympic Games without the support of a strong and highly visible cultural programme. Through my role at the Commission, I trust I can provide advice and influence so that the next century of Olympic Games hosting brings to the fore the original vision of a fully balanced celebration of sport, culture and education.

Our explicit mission at the Commission is to ensure Olympic heritage and culture are presented in ways that resonate with a new generation of Games fans and participants, while building on the 100+ year history preceding us.

My personal objective, in accepting this role, is also to bring much needed dynamism, openness and debate over what it means to explore and express diverse and locally rooted contemporary cultures within a global media mega-event. I aim to do so by encouraging greater support towards new artistic and creative interventions and by making sure cultural expression is not confused with generic or de-contextualised entertainment.

Joining the IOC Culture & Heritage Commission is a privilege, a chance and a challenge. I am delighted to take this opportunity on.”