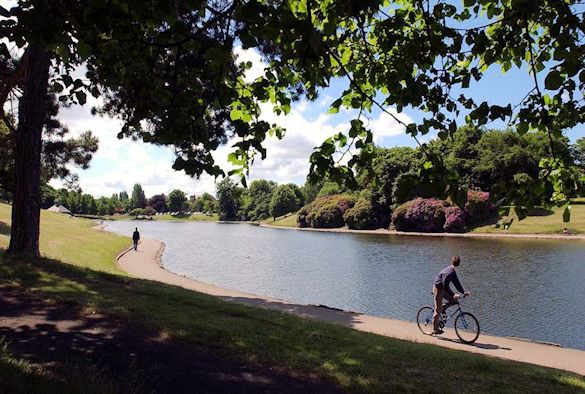 Dr Ian Mell is a lecturer in the Department of Geography & Planning:

“This week saw the release of the interim report of the Liverpool Green & Open Space Review, which set out Liverpool City Council’s initial thoughts on how the city may finance the management of its landscape in the future.

As a member of the Review Board, I and the other members, have been part of an extensive discussion reflecting on the value of the physical landscape in Liverpool, the benefits it provides for local communities, and the complex financial questions being asked of the city council in light of the ongoing austerity measures being placed on local government.

Throughout 2015 the board led by Simon O’Brien, a local environmental activist, have engaged with communities, campaign groups and other public and private stakeholders to better understand the value of green and open space within the city.

The review has also been tasked with identifying alternative funding opportunities that could be used by Liverpool City Council to address the lack of financial support for discretionary services, of which green and open space manage is one.

The cuts to Liverpool’s public funding, reported to be approximately 58% since 2010/11, has led to the City Council and Mayor having to make difficult, and in many cases unpopular choices about which services they are legally required to deliver.

However, in parallel in an ongoing discussion of the moral responsibility they have to provide a liveable and socially sustainable city that is attractive, functional and accessible. Finding a balance between these two opposing ideas has been difficult.

Within the interim report the Board members have started to explore how Liverpool City Council can rethink how it funds capital investment and revenue spending on maintenance. Rather than simply reviewing how central and local government funding can be used to meet service needs, the review has looked more broadly at how communities, developers, and corporate/commercial interests could be engaged to generate funding for the city’s green spaces.

This is not always an easy thing to achieve, as many people believe that all green and open spaces should be retained, and that the city should be able to find funding to maintain them. Such a pervasive view was frequently presented during the consultation process and I, and other Board members, have sympathy with this view.

Unfortunately, green and open space management has to be debated alongside Adult Social Care or the provision of libraries as services which may feel the brunt as the council’s cutbacks.

Two options proposed within the interim report which could help Liverpool City Council to address the funding shortfalls illustrate the breadth of options under discussion.

The first is a possible increase in Council Tax of approximately £4.50 per head within the city which would be ring-fenced by the city fund and manage green and open space. This would cover the loss of the non-statutory budget currently allocated to green and open space provision and would provide an on-going source of income for the city.

Increases in local taxes have been trialled in Bristol where homes near parks paid a premium. Policy Exchange also suggested that such a mechanism could provide valuable funding for the long-term maintenance of green spaces following cuts to local authority budgets.

The question remains though would people across Liverpool be willing to pay such a tax? Would it be linked to quality? And what mechanism would be in place to ensure that all parks were managed to meet the social and ecological needs of the communities they serve?

The second option is to require development in specific locations to feed into a strategic investment fund for the provision of green corridors across the city. The report has started to identify where such corridors exist, they are spatial dispersed across the city, and potentially funding would be sought to improve connectivity, access to green space and to enhance the landscape.

The development of this proposal is embryonic but could be a mechanism similar to Community Infrastructure Levy (CIL) schedule whereby Liverpool City Council could require all development in these locations to support the development of green corridors.

Whilst a lot of effort, thinking and hard work has gone into the interim report there is still much to do. Over the coming months the Board will undertake a second round of public meetings to discuss the interim findings and help shape the final report.

Whilst the recommendations of the report may not meet everyone’s expectation there are a major step forward in rethinking how the city council looks to fund green space provision and management in the future. Moreover, what is certain is that the people of Liverpool care deeply about the health, well-being, social and ecological value of the city’s green spaces.

Finding innovative and sustainable ways for Liverpool City Council to manage the landscape is therefore imperative to ensuring the liveability of the city.”