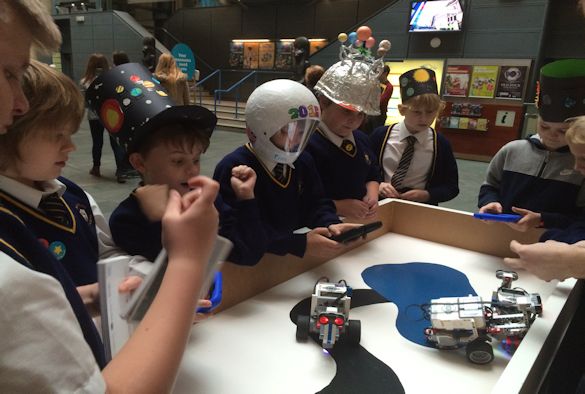 Hundreds of schoolchildren were invited to the museum to watch the Soyuz rocket carrying Tim Peake blast off to the International Space Station. The children then participated in a range of activities that demonstrated space science and engineering.

Lego Rovers is a public understanding activity funded jointly by the Strategic Technology Facilities Council and the Centre for Autonomous Systems Technology at the University.

It is taken into schools in the North West and is used to introduce children to ideas from space science, robotics and artificial intelligence. It demonstrates the difficulties involved in controlling robots on distant planets when radio signals can take minutes or hours to reach them, and allows children to create simple rules so the robots can avoid obstacles by themselves.

It works using an Android app that talks to the Lego Robots by bluetooth. The University’s Centre for Autonomous Systems Technology was delighted to be invited to participate in the World Museum’s event and discuss its work and research with the scientists of the future.

Dr Kamali, a postdoctoral research associate on the EPSRC funded Verifiable Autonomy project which studies how to make autonomous systems safe, said: “Machines with thinking ability have been affecting the routines of our daily life in ways that we are not even aware of.

Joe Collenette who helped develop the app before starting work on a PhD in artificial intelligence said:  “It was a delight to see people interacting with the code I’ve written. Everyone had a great time and I’m sure there are some future scientists among them”.

To find out more about Lego Rovers visit the website: http://cgi.csc.liv.ac.uk/~lad/legorovers/index.html