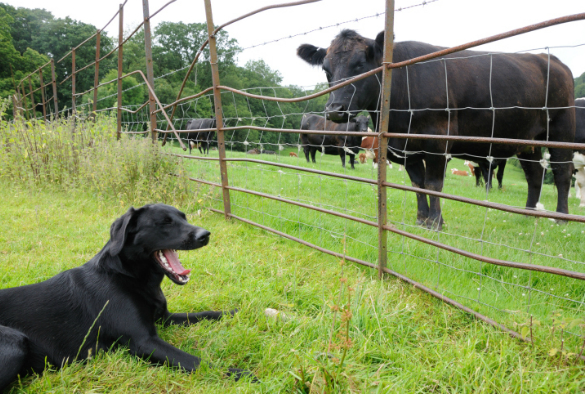 Dog owners are being urged to remember to be vigilant with their pets when walking near cows in the countryside, following a new review into cattle attacks by the University of Liverpool.

Anecdotal media and hospital reports of cattle causing injury or death to members of the public have existed for many years, but until now no further investigation has been carried out examining why these events may occur.

This project reviewed details of negative interactions between the public and cattle, to identify risk factors for cattle attacks, and highlight the availability and usefulness of guidance on walking among livestock.

A total of 54 cattle attacks on people were reported in the UK media between 1993 and 2013 and, of these, approximately one in four were fatal and two-thirds involved dogs.

Dr Carri Westgarth, a dog behaviour expert at the University’s Institute of Infection and Global Health, said: “We found that walking with dogs among cows, particularly with calves present, was a common factor for an attack.

“One theory for this is that the cows may feel particularly threatened by dogs, especially if they have young to protect. People then try to protect their dogs, which can lead to a tragic incident occurring.”

The review of published literature, newspaper articles and web pages also highlighted that injuries from cattle are a significant and under-reported public health risk.

Dr Marie McIntyre, who co-authored the review, said: “There is currently no official system in place for reporting attacks, so it is highly likely that there have been far more incidents than we know about. Further work is needed to fully assess the public health impact of this issue.”

There are approximately 300 000 farms and 9.7 million cattle in the UK. Many public rights of way cross farmland, so while walking, people come into contact with livestock, particularly cattle.

Within the various guidelines reviewed, advice of how to behave around cattle and avoid injury were found to vary, in particular concerning control of dogs.

Dr Westgarth added: “The countryside is a great place to exercise dogs, but it’s every owner’s duty to make sure that their dog is not a danger or nuisance to farm animals, wildlife or other people. Considering our findings, the best advice, if cattle approach, would be to let your dog off the lead, as then it can escape, and the cows are also likely to remove their focus from you.”

‘Are cattle dangerous to walkers? A scoping review’ is published in the journal Injury Prevention and can be viewed here. 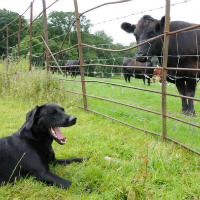