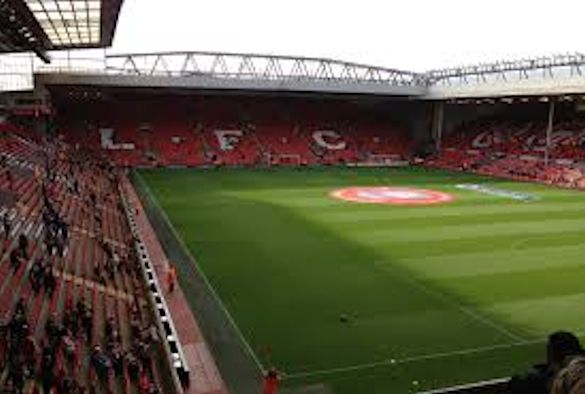 Kieran Maguire is a Lecturer in  Economics, Finance and Accounting at the University of Liverpool:

“In the 77th minute at Anfield on Saturday approximately 10,000 fans stood up and walked out of the stadium with their team beating Sunderland 2-0.

It wasn’t because they had all been given the gift of foresight, and knew that some insipid defending would allow the Wearsiders to score a couple of late goals.

Instead it was an organised and coordinated response by fans’ groups to the news that new ticket prices for next season included an increase in the highest match day prices to £77.

The walkout has been well publicised, and the fans stand has had broad support from fans of other clubs too.

Liverpool FC, under the ownership of their American owners, the Fenway Sports Group (FSG) have spent well over £100 million building the new main stand, and the owners are looking for a return on their investment, whilst fans are looking for fair pricing.

The club have claimed that 64% of prices have been frozen or have been reduced, but that still means that they have been increased for about 15,000 fans.

Increasing the capacity of Anfield from 45,000 to 54,000 will automatically generate extra income through the number of people attending, so is there a need to increase prices too?

Where do football clubs get their money from?

There are three main sources of income for clubs, fans, television, and commercial deals.

Last year (2014/15) Liverpool generated total income of £298 million. Just under one fifth of this (£57 million) came from fans. This compares to Manchester United (£86 million), Manchester City (£43 million), Chelsea (£71 million) and Arsenal (£100 million) in the other Premier League big hitters.

FSG want to narrow the gap between the Reds and some of their rivals in this regard. Manchester City have lower income from this area due to a combination of low ticket prices and (until this season) a lower capacity at the Etihad (where 10,000 fans also walked out early this weekend, but mainly due to City being 3-0 down to Leicester at the time). City also have owners who are not looking for a return on their investment.

New TV deals for both domestic and international rights to the Premier League were confirmed a couple of weeks ago. The sum confirmed was £8.1 billion, an increase of about 50% compared to the previous three year period. This means that Liverpool could expect to receive TV money of about £150 million a season for a top six finish, and £200-220 million a season if they qualify for the Champions League, when the new deal starts in August.

Fans, seeing these huge amounts being generated from TV, argue that there is no need to increase the sums charged to fans for attending matches.

Football is a profitable game

Liverpool just about broke even in 2013/14, their first year of profit in some time. A substantial profit is anticipated when the 2014/15 results are announced in the next month or so, due to the sale of Luis Suarez and Champions League income.

The announcing of the ticket price changes before the annual accounts are published may have been a strategic move by the Liverpool board. It would be even more difficult to justify the proposed increases if the club do announce substantial profits.

Therefore fans see no need to be used as cash cows. The extra money from TV is likely to go into the bank accounts of players, their agents, but also potentially more and more to their owners.

For 2013/14 (the last year for which there are figures for all clubs) the Premier League made a collective operating profit of £614 milion. This figure is likely to increase substantially.

The ownership of clubs has changed in recent years. They are no longer the domain of the local lad who was a supporter and was successful in business, and who wanted to invest back in the club he loves.

The vast majority of clubs in the Premier League are now foreign owned/controlled as can be seen below: 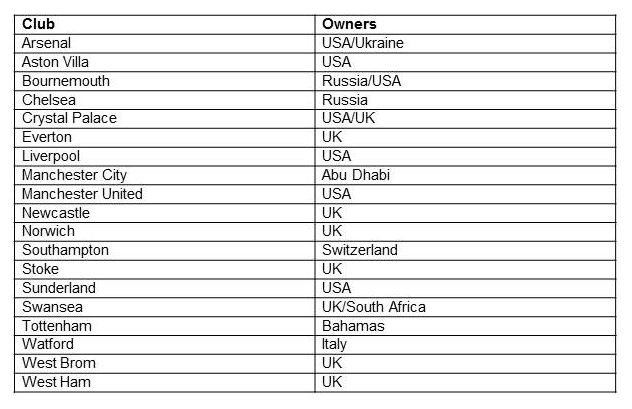 Many new owners see the clubs as cash making vehicles, and the fans as sheep to be fleeced. They are aware that football tourism in England, personified by selfie sticks, half and half scarves and big ticket purchases in the megastore, is lucrative and more than happy to pay £77 for a ticket, compared to the fan who has sat with his/her mates since a kid, and whose prize possession is Alan Kennedy’s autograph on a 1981 European Cup Final program.

With a 2/3 majority needed to make key decisions, don’t be surprised if the next suggestion form the owners is to abolish promotion and relegation, in order to protect the value of their investments.

Liverpool FC owners have scored an own goal. They do have the ability to win back the fans by reassessing their pricing structure.” 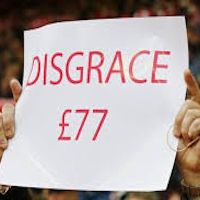