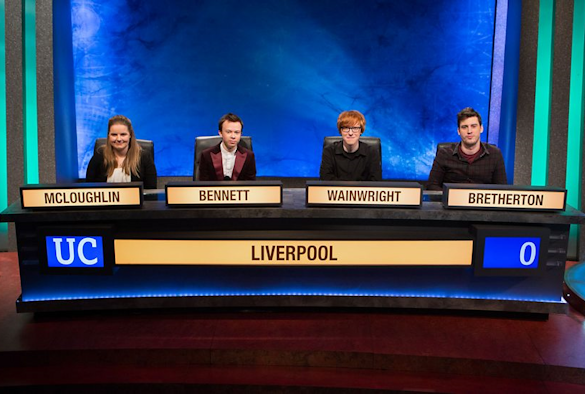 The University of Liverpool’s University Challenge team triumphed over Newcastle University to move one step closer to the semi-final.

The team is made up of captain, Robin Wainwright, studying Biological Sciences; Jenny McLoughlin who studies Biological and Medical Sciences;  Law student Jack Bennett; and Medical student Ed Bretherton. After a strong start from Newcastle, Liverpool fought back to beat their opponents 190 – 150 in the long-running quiz.

Host, Jeremy Paxman, congratulated the Liverpool team on their win but described them as ‘living dangerously’. In the early rounds of questions, Newcastle led by 70 points (65 to – 5); however Liverpool showed tenacity and some impressive music knowledge to come back into contention.

A Lord of the Rings bonus round edged Liverpool ahead of Newcastle in the latter stages – as Robin displayed his impressive knowledge of Tolkien to answer all questions correctly and move Liverpool to victory.

The team will appear in the next round of Quarter-Finals in the coming weeks – another win will secure their place in the Semi-Finals.

You can catch up on the team’s win over Newcastle on BBC iPlayer.

University Challenge airs on Monday evenings, at 8pm on BBC2.