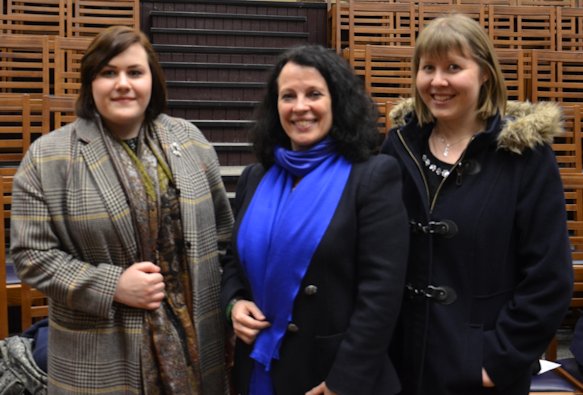 French Ambassador Sylvie Bermann spoke to University staff and students at a lecture focused on Franco-British relations and the EU referendum.

The Ambassador also discussed the Schengen agreement and the colonial past of both Britain and France in Africa with audiences following the lecture, which was entitled the ‘Franco-British Relations in the Perspective of the EU Referendum’.

The Ambassador was introduced to staff and students at the University by Executive Pro-Vice-Chancellor for the Faculty of Humanities and Social Sciences, Professor Fiona Beveridge, alongside Professors Amandine Garde and Michael Dougan from the School of Law.

Students from the School of Histories, Languages and Cultures and the School of Law and Social Justice were able to speak to the Ambassador after the event, including French students Lleuwen Hedd, and  British Council-nominated Ambassador for Study Abroad, Olivia Colquitt (pictured). Llewen has been nominated to work at Liverpool’s partner University in Nancy, France, next year as an English-language tutor.

Pro-Vice-Chancellor for the Faculty of Humanities and Social Sciences, Professor Fiona Beveridge, said: “It was a great honour to welcome Her Excellency, Madame Bermann to the University at this critical time for the EU and the UK, and to hear such a well- informed perspective on what British membership means to us and to France.”

“Our students posed a very wide range of questions and the Ambassador offered nuanced perspectives on the complex and difficult issues which the Brexit referendum debate will raise.”

Earlier in the day the French Ambassador also met Liverpool Mayor Joe Anderson and planned to visit the Tate Gallery after visiting the University.