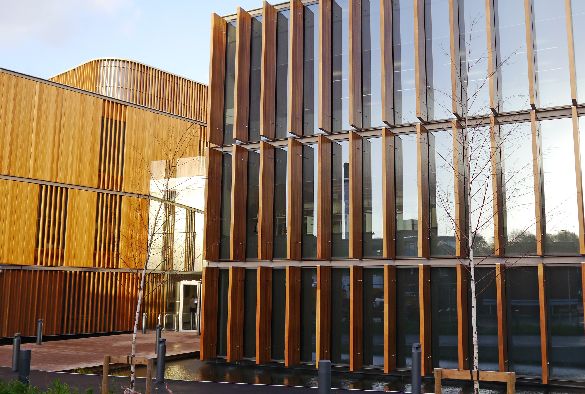 The University of Liverpool and Alder Hey Children’s Hospital have officially opened the first phase of a research institute dedicated to improving the health of children around the world.

The Hospital and ‘Institute in the Park’ are the first of two buildings to be completed on the Alder Hey in the Park Campus in Liverpool, at a combined cost of £260 million. The Institute aims to bring together experts in education, research and technology, to focus on improving the care and understanding of children and their health needs.

Occupied by academic researchers, healthcare professionals, technology companies, commercial research teams, students and educators, its unique co-location within one of Europe’s busiest children’s hospitals means that every child, and healthcare professional that cares for them, will have the opportunity to routinely participate in studies.

Vice-Chancellor Professor Janet Beer said: “The University and Alder Hey have successfully worked together for nearly 50 years at our Institute of Child Health, which addresses research in areas such as sepsis, arthritis, bronchiolitis and asthma.

“Together we have made major advances, including the world’s first trial of a fully licensed drug for use in children with arthritis. This new facility would not have been possible without generous donations from our partners and supporters, who have helped us to further improve the health of children around the world.”

The ‘Institute in the Park’ hosts part of the National Coordinating Centre of the National Institute for Health Research (NIHR) Clinical Research Network (CRN), which is responsible for all children’s research across the country. It is also home to the UK’s only Experimental Arthritis Treatment Centre for children.

It supports the NIHR Alder Hey Clinical Research Facility for studies of new treatment for children. Teams of biomedical researchers are searching for new better and safer medicines for children and developing new formulations of medicines, especially for children.

Sir David Henshaw, Chair of Alder Hey Children’s NHS Foundation Trust, said: “We have great ambitions to improve the health of children everywhere by creating a unique environment where ideas can flourish, be tried out in a real-world hospital environment and then become available as practical solutions which are incorporated into the latest medical education.

“We want to attract the best and brightest people with different expertise and experience to collaborate alongside us to contribute to the physical wellbeing of children and also the economic wellbeing of the North West of England.”

The University and Alder Hey Children’s Charity have worked in close partnership to raise funding to build the first phase of the Institute. Donors and pledges include; the European Regional Development Fund; Liverpool City Council; Matalan; the Wolfson Foundation; the Garfield Weston Foundation; the Sir Jules Thorn Charitable Trust; The North West Coast Academic Health Science Network; and alumni and local supporters. Fundraising to complete phase two of the project is ongoing.

Commenting on the fundraising campaign, Clare White, CEO of Alder Hey Children’s Charity said: “The Institute in the Park has been made possible by the generosity of many institutional and individual donors and we would like to give them our heartfelt thanks. Fundraising for part two of its development will help us bring even more researchers and educators onto the campus.”