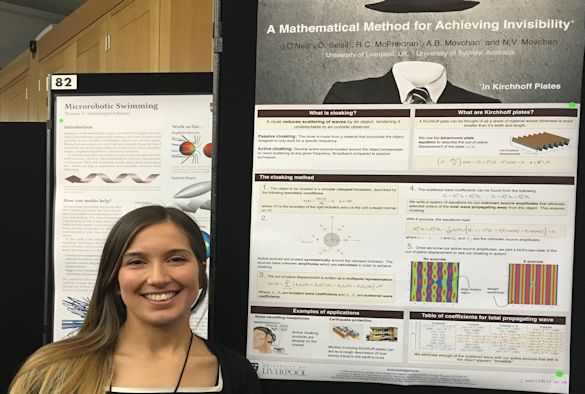 Jane O'Neill with her poster

Early career researchers from the Faculty of Science and Engineering were part of a select group chosen to present their research at the SET for Britain event which took place in the House of Commons.

Tianyuan (Nina) Ni, Meng (Simon) Wang, Stewart Haslinger and Jane O’Neill, all from Mathematical Sciences, and Reino Niskanen from the Department of Computer Science were shortlisted from hundreds of applicants to present their research to politicians and a panel of expert judges, as part of SET for Britain.

SET for Britain is an annual poster competition held in the House of Commons – involving more than 200 early stage or early career researchers – judged by professional and academic experts. It also provides MPs an opportunity to speak to some of the country’s best young researchers.

Only 30 mathematicians were chosen to present their posters at the event and the University had four representatives present in this category.

Stewart Haslinger said: “In my poster, I used mathematics to model elastic metamaterials – which are artificially engineered super-lattice materials designed with periodic arrays so that their function is defined through structure rather than being limited by their chemistry.

“In particular, a thin elastic wave is patterned in specific ways to control the direction of flexural waves – there are potential applications in the design of shielding systems to redirect waves in earthquake-vulnerable areas. The details are quite complicated but a poster is an excellent way to communicate the ideas and concepts.”

Jane O’Neill’s poster was about active cloaking in thin elastic plates and described a mathematical method for constructing a system of algebraic equations that can render an object “invisible.   The research described in her poster provides a stepping stone to a wide number of applications in mathematics, engineering and physics.

He said: “It was a great event to be part of and I had a lot of interest from the Bank of England, amongst many others who came to speak with me about my work.”

He said, “I considered a very simple mathematical abstraction of an interactive process represented by a game where two players move a token on an integer grid, and show that, surprisingly, no algorithm exists to check in advance who wins. Therefore analysis of even simply formulated `Attacker-Defender’ games requires a significant development in mathematical and computational theory behind it.”