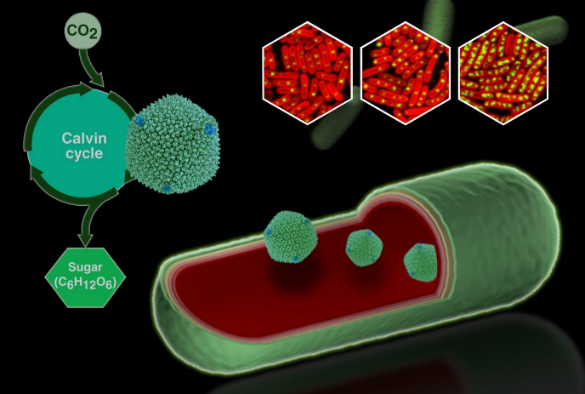 Fluorescently tagged carboxysomes as viewed under a microscope (top right) and an illustration of carboxysomes within a bacterial cell.

Scientists at the University of Liverpool have tracked how microscopic organisms called cyanobacteria make use of internal protein ‘machines’ to boost their ability to convert carbon dioxide into sugar during photosynthesis.

With global food and energy security one of the greatest challenges of the 21st century, the new findings could help inform the design and engineering of new nanotechnologies to improve crop yields and biomass production.

Cyanobacteria, often known as blue-green algae, are among the most abundant organisms in oceans and fresh water. They are similar to green plants because they can use the energy from sunlight to make their own food through photosynthesis. However, unique to cyanobacteria are intracellular structures called carboxysomes that allow them to convert carbon dioxide to sugar – a process known as carbon fixation –  significantly more efficiently than many crops can.

Carboxysomes are made of polyhedral protein shells and contain the enzymes required for the bacteria to fix carbon during the Calvin cycle stage of photosynthesis. Little is known about how these nanoscale ‘machines’ are produced or how they are regulated to adjust to environmental changes, such as light intensity.

In a new study, published in Plant Physiology, researchers from the University’s Institute of Integrative Biology attached fluorescent tags to carboxysomes and then used a fluorescence microscope to watch them in action within individual cells.

By experimentally altering the amount of light available during cell growth the researchers observed how cyanobacteria regulate carbon fixation activity by changing the amount of carboxysomes in cells.

The researchers also used chemical inhibitors that modify metabolism to monitor how this affects the distribution pattern of carboxysomes. They found that carboxysomes can either spread out or sit in the central line of the rod-shaped cell, depending on the redox states of electron transport pathways induced by the inhibitors.

In collaboration with Dr Steve Barrett from the University’s Department of Physics, the team developed a method to statistically analyse hundreds to thousands of bacterial cells from the microscope images.

Co-author Dr Fang Huang, said: “It’s exciting that through this technique we can now monitor, in real time, how bacteria modulate carboxysomes to maximise their carbon-fixing capacity. Our findings also provide some new clues about the relationship between the positioning of carboxysomes and cell metabolism.”

Carboxysomes are of interest to synthetic biologists and bioengineers, who hope to find ways to utilise their energy-boosting potential in food and biofuel production.

“There’s still a lot we need to learn before their potential can be exploited. At this stage, we’re just starting to understand how these fascinating cellular machines work, and this study marks another important step forward in this process.”

The project was funded by the Biotechnology and Biological Sciences Research Council (BBSRC) and a Royal Society University Research Fellowship. 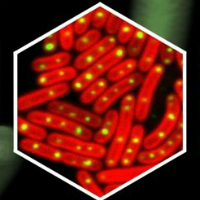