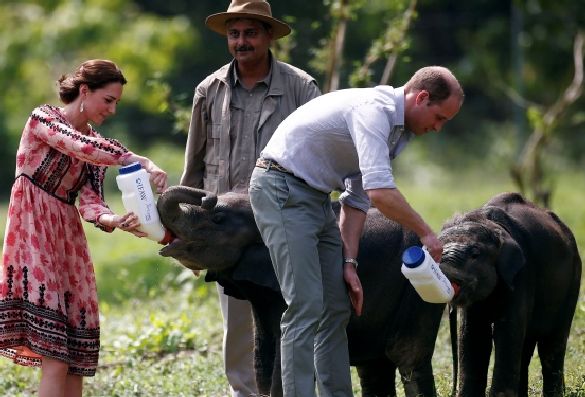 Dr Deana Heath is Senior Lecturer in Indian and Colonial History at the University’s Department of History:

“The visit of the Duke and Duchess of Cambridge to India and Bhutan has attracted considerable media attention. The coverage has included numerous photographs of the royal couple visiting the sorts of places and peoples that Orientalist-minded westerners view as the essence of countries such as India – from Mughal monuments to Bollywood stars, and from wildlife sanctuaries to slums – not to mention reams of gushing accounts of the Duchess’s wardrobe.

Yet what’s been missing from such coverage is an explanation of what the purpose of such a trip was for – about what, in other words, the royal visit was actually about. Nor has there been much reflection about the euphoric reaction to the visit in the countries graced with the royal presence. As Rajyasree Sen observed in the Indian on-line journal Live Mint, thanks to the enamoured tone of the press in India “You would never think that India is no longer part of the erstwhile British empire or that we were pillaged and plundered. . . by William and Kate’s own ancestors.”

Considering that Indians fought a decades-long campaign to oust the British from India, and with it to end the reign of a British-imposed Indian ‘emperor’, the euphoric reception India accorded the royal couple seems, at the very least, baffling, and at the worst a worrying loss of historical memory. To explain such seeming amnesia – and with it to make sense of what the purpose of William and Kate’s visit actually was – we need to consider how the British re-invented royalty in India in the late nineteenth-century.

From the time the British secured their first foot-hold in India with the conquest of Bengal in 1757 they were faced with the problem of their lack of legitimacy as Indian rulers – both because they were foreign, and because of their anomalous position of enacting such rule through a trading company (the East India Company). Such a problem grew as the British went on to conquer and colonise more of the subcontinent.

They strove to overcome this problem by maintaining the Mughal emperor as symbolic sovereign (even though, by the early nineteenth century, he was a virtual prisoner in Delhi) and operating through Mughal idioms of rule. Through such means as durbars, in which valuables were exchanged, Mughal rulers enacted what the anthropologist Bernard Cohn has termed acts of “incorporation” that served to establish a relationship between the giver and the receiver.

The British, however, misunderstood rituals such as the durbar and viewed them as mere exchanges of goods that constituted the submission of the former to the latter. When they enacted such rituals, the colonisers therefore also changed their meanings by transforming them into acts of subordination.

The process of transforming Indian idioms of rule in order to enhance and legitimise the rule of the colonisers gained pace when, following a huge revolt in north India that revealed the British lack of legitimacy as rulers of India, the Mughal emperor was tried for treason and exiled, and sovereignty over India was vested in the British monarchy in 1858. In a process later mirrored in other colonial contexts – part of a process of ‘traditionalising’ non-Western societies (according, that is, to Western interpretations of their ‘traditions’) – the British set about ‘feudalising’ India. This entailed an elaborate process of creating a hierarchy of Indian rulers, namely the heads of more than 500 “princely states”, as the British termed them, that were governed indirectly by the British, and other elites, with the Viceroy, Queen Victoria’s representative in India, at the top.

They also invented new Indian aristocratic titles, concocted coats of arms for Indian rulers, and developed elaborate codes of conduct that stipulated such things as the number of gun solutes a ruler was entitled to. Rewards were given out based on the perceived ‘loyalty’ and ‘service’ of the individual in question.

The feudalisation of India was not complete, however, until the proclamation of Queen Victoria as Empress of India – or, to use the bizarre Urdu title that was invented for her, “Kaiser-i-hind” – in 1877. To issue the proclamation in India a vast “Imperial Assemblage” was held in Delhi, the site of the former Mughal capital, in which the British appropriated – or, rather, invented – a host of new royal traditions. Members of the royal family had begun going on tours of India since the 1860s as a means of representing the purported bond between rulers and ruled. But the Assemblage served to enshrine a new – albeit feudal – idiom of colonial rule in India.

Nothing so grand as the Imperial Assemblage or later imperial durbars was held for the Duke and Duchess on their recent tour, of course – our monarchy is, after all, no longer sovereign over India. But the Commonwealth, conceived of as a means to continue empire in a new guise, lives on, not least thanks to the role of the royal family in perpetuating it. So when the royal couple attend a dinner hosted by the British High Commissioner replete with 1,200 guests, at which the Duchess wears a £3,000 “Indian-inspired” dress and the royal couple are invited to cut a cake to celebrate the Queen’s 90th birthday with a large ceremonial sword, it’s clear that the legacies of the symbolic idioms of rule fashioned by our colonial forbears continue to endure.”