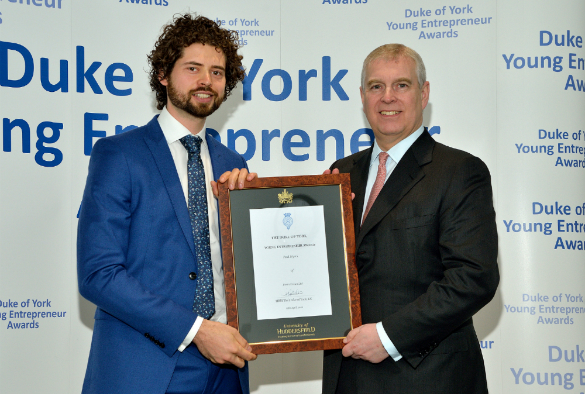 An enterprising University of Liverpool scientist has received the prestigious Duke of York Young Entrepreneur Award.

The awards are presented to students who have displayed remarkable entrepreneurship while at University. Finalists from 19 universities from across the North attended the 2016 awards ceremony at the University of Huddersfield where the Duke of York presented them with certificates.

A selection of the finalists were also nominated to give 60-second pitches describing their businesses, and an audience vote chose Paul’s Farm Urban pitch as the winner.

Farm Urban develops and tests the most efficient ways to grow food in urban environments, focusing primarily on aquaponics systems, which grow fish and vegetables simultaneously in a closed-loop ecosystem.

Since the business was formed in 2014, with the help of a £5,000 grant from the Liverpool Guild of Students, followed by an £8,000 grant from the Friends of the University, it has gone from strength to strength. Over the past two years, the team has developed several sites around Liverpool, ranging from smaller, experimental, community-based sites, to larger more commercially-focused enterprises.

Installations include an urban farm on the roof of the Guild, which showcases the latest in sustainable growing techniques and renewable energy technologies, and three state-of-the-art aquaponic systems at the new Alder Hey Children’s Hospital, which provide a focal point for patients, parents, staff and visitors.

Paul, who is now a postdoctoral researcher at the University’s Institute of Integrative Biology, said: “By taking science fresh from the lab and implementing it in the heart of urban communities, we aim to change both how we do science and how we farm our food. Winning the award shows that what we have been doing as a social enterprise has been recognised and has value.”

Project mentor Dr Iain Young, who now has a non-executive director role at the company, said: “This is a well deserved affirmation of the efforts of Paul and the Farm Urban team, who are an excellent example for future student entrepreneurs. I am very proud to have been able to support them and look forward to seeing them go on to further success.”

The team are currently focusing on their aquaponics education programme for schools, and also have plans to take their compact commercial systems into cafes and restaurants.

Visit www.farmurban.co.uk for more information and keep up to date with the team’s latest news on Twitter @Farm_Urban. 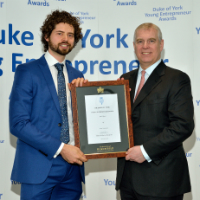