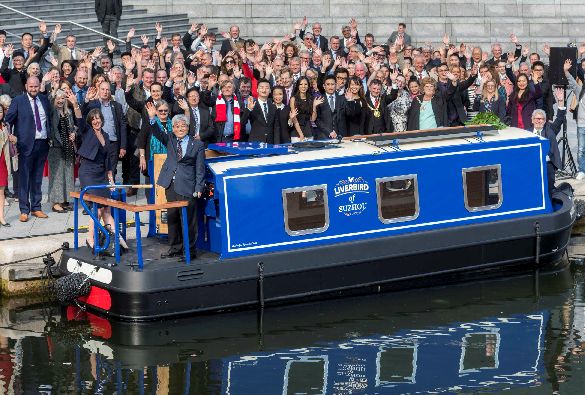 The University of Liverpool has celebrated 10 years since the opening of Xi’an Jiaotong-Liverpool University (XJTLU) at a special maritime ceremony at the city’s Mann Island.

The University opened XJTLU in the world heritage city of Suzhou, China, in partnership with Xi’an-Jiaotong University, in 2006. The institution has grown rapidly over the past 10 years, with more than 10,000 students studying across a variety of subjects such as computing, maths, engineering and architecture in Suzhou and in Liverpool.

To celebrate the partnership, which is rooted in the maritime history between Liverpool and China, the University will launch a Liverpool-Suzhou narrow boat in the Mann Island canal basin, followed by traditional Chinese dragon dancing and the opening of an ‘XJTLU 10’ display case at Liverpool Museum’s ‘East Meets West’ exhibit.

The exhibition, part of the Museum’s ‘Global City’ showcase, will explore the 19th Century maritime links between South East China and Liverpool, when ships would arrive in the city bringing an influx of goods to trade, as well as Chinese seaman who would eventually settle in Liverpool. Over time, these seamen established what would become the oldest and one of the largest established Chinatowns in Europe.

Vice-Chancellor of the University of Liverpool, Professor Janet Beer, will officially ‘bless’ the boat, called ‘The Liver Bird,’ before it sets off on the second part of its journey to rest in the Suzhou canal, where it will also be used to host future University events.

Professor Beer said: “Our celebrations of XJTLU represent how much we value our partnership with China.  The gift of a narrow boat will be a lasting representation of our history together and will provide a unique event space for students and staff at both universities.

“It is our ambition to offer international opportunities in an ever-more globalised world.  Our partnership with Xi’an-Jiaotong University makes us uniquely placed to provide truly trans-national education.”

It is estimated that the value of UK education and training exports to the UK economy to be £14 billion, with a projection that this could rise as high as £26 billion by 2025. Research suggests that international students generate £400 million in expenditure for the local region.

XJTLU is based in Suzhou Industrial Park, one of Asia’s most successful business parks, a hub for foreign investors, and home to more than 3,000 international organisations, including 84 Fortune 500 companies.

Executive President of XJTLU, Professor Xi Youmin, said: “As we celebrate the extraordinary first ten years of XJTLU, we also anticipate an exciting future, with yet more expansion planned.

“Phase one of our South Campus will open in July with five new buildings that will help continue the tradition of East-West dialogue by expanding our capacity for international cooperation in research, knowledge exchange and innovation.

“Later phases will include state-of-the-art facilities for XJTLU’s International Business School Suzhou and a brand new School of Film and TV Arts.”

In the past year the University has also celebrated the launch of its first ‘Year in China’ programme, which allows undergraduate students, from a wide-range of departments at Liverpool, the opportunity to spend a year studying at XJTLU. Students are able to complement their degree with the study of Chinese language, politics culture and history.

Earlier this week former Vice-President of Xi’an Jiaotong-Liverpool University (XJTLU), Professor Michael Fang, and co-founder of the Liverpool-Shanghai partnership, Nick Earlam, were awarded honorary degrees by the University of Liverpool, as part of the anniversary celebrations.

The boat naming ceremony will take place at Mann Island canal basin at 5.30pm on Wednesday, 11 May. The East Meets West exhibit is open now. 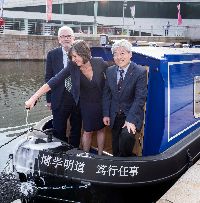