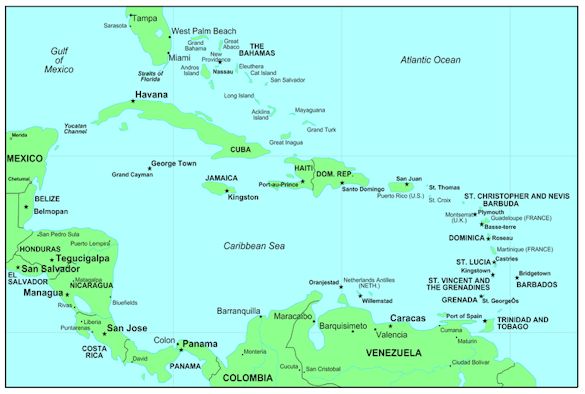 A study of the Caribbean Sea by University of Liverpool ocean scientists has revealed that, in the midst of all the noise of the ocean, this region behaves like a whistle, which blows so loudly that it can be ‘heard’ from space in the form of oscillations of the Earth’s gravity field.

The Caribbean Sea is a part of the Atlantic Ocean, southeast of the Gulf of Mexico. It is surrounded by South America, Central America and the Caribbean islands, and covers an area of approximately 2,754,000 km2 (1,063,000 miles2).

Researchers analysed the sea levels and pressure readings taken from the bottom of the Sea using four different models of ocean activity in the Sea over the period 1958 up to 2013 as well as using information from tide gauges and satellite measurements of gravity.

They noticed a phenomenon which they have called a ‘Rossby Whistle’ which happens when a Rossby wave – a large wave which propagates slowly to the west in the ocean – interacts with the seafloor.

This causes the wave to die out at the western boundary and reappear on the eastern side of the basin, an interaction which has been described as a ‘Rossby wormhole’. Only waves of particular lengths can survive this process without cancelling themselves out, but these particular waves reinforce themselves, producing an oscillation with a sharply-defined period.

As a result, water sloshes in and out of the basin every 120 days. This mass change is sufficient to make changes to the Earth’s gravity field which can be measured from satellites. The 120 day period means this whistle plays a note of A-flat, although it is many octaves below the audible range.

Professor Chris Hughes, an expert in Sea Level Science at the University, said: “We can compare the ocean activity in the Caribbean Sea to that of a whistle. When you blow into a whistle, the jet of air becomes unstable and excites the resonant sound wave which fits into the whistle cavity. Because the whistle is open, the sound radiates out so you can hear it.

Similarly, an ocean current flowing through the Caribbean Sea becomes unstable and excites a resonance of a rather strange kind of ocean wave called a ‘Rossby wave’. Because the Caribbean Sea is partly open, this causes an exchange of water with the rest of the ocean which allows us to ‘hear’ the resonance using gravity measurements.

The video below shows how the Rossby wave propagates, together with the matching ocean bottom pressure (ocean mass) time series. The sound on the movie is the actual note played by the ocean, sped up to the audible range, and repeated several times.

“This phenomenon can vary sea level by as much as 10 cm along the Colombian and Venezuelan coast, so understanding it can help predict the likelihood of coastal flooding.”

Small sea level changes can greatly increase the probability of flood losses and Barranquilla, in Colombia, has been identified as a city in which flood losses will sharply increase with as little as 20 cm of sea level rise.

Scientists believe that the `Rossby whistle’ may also have an impact on the entire North Atlantic, as it regulates the flow in the Caribbean Current, which is the precursor to the Gulf Stream, an important cog in the ocean’s climate engine.

The article `A Rossby Whistle: A resonant basin mode observed in the Caribbean Sea’ is published in the journal Geophysical Research Letters. 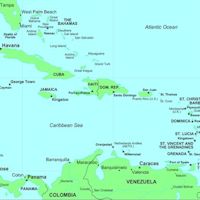