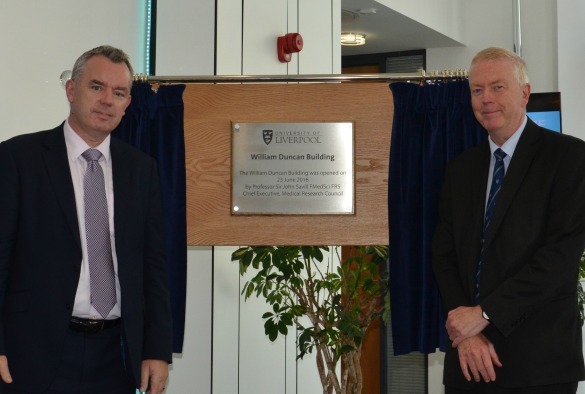 The University of Liverpool has launched a new £35 million bespoke research facility, naming it after the UK’s first Medical Officer of Health, William Henry Duncan.

The building was officially opened and named by Sir John Savill, Chief Executive of the Medical Research Council (MRC).

William Henry Duncan (27 January 1805 – 23 May 1863), also known as Doctor Duncan, was an English doctor who worked in Liverpool as its first Medical Officer of Health.

The building provides state-of-the-art facilities and aims to help create a unique research and industry environment to help maintain the University’s position as a world leader in medical research.

It accommodates the Liverpool Bio Innovation Hub (LBIH), which provides a space for small and medium sized enterprises (SMEs) working in the biomedical sector.

Home to researchers, clinicians, and postgraduate students from the Institutes of Ageing and Chronic Disease and Translational Medicine, it is located on land adjacent to the University’s Bioscience and Ronald Ross Buildings on Crown Street, as well as being positioned opposite the construction for the new Royal Hospital.

The development has brought health experts together on one site for the first time, as they were previously located at 10 different sites. The new building has been designed to allow specialists to work more closely together, with increased contact with students.

Deputy Vice-Chancellor, Patrick Hackett, said: “Liverpool’s place in public health history is guaranteed by the contribution of William Henry Duncan as the country’s first ever Medical Officer for Health.

“The building’s name is a fitting tribute to a man who transformed healthcare and it also reflects our aim of improving the quality of life for millions of people worldwide through world-class health research.”

At the event Sir John Savill, said: “The concepts behind the building are without fault as an interdisciplinary collaborative industrial interface.

“As a clinician scientist, being just across the road from the hospital will be enormously beneficial. The MRC strategy is entitled ‘Research Changes Lives’ and I am convinced the research that you will do in this building will change lives.” 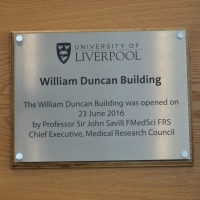