Two academics from the University’s Institute of Psychology, Health and Society have been presented with commendations from the National Crime Agency (NCA) in recognition of their ongoing contribution to the fight against child sexual exploitation.

Professor Laurence J. Alison and Dr Ricardo Tejeiro assisted with a nation-wide NCA investigation into online images of child sexual exploitation resulting in the arrest of more than 650 people. These people were arrested for a variety of offences including possession of indecent images and serious sexual assault.

Coordinated by the National Crime Agency (NCA) in conjunction with the National Police Chiefs’ Council (NPCC) Operation Notarise targeted people allegedly accessing indecent images of children on the Internet, a majority of whom were previously unknown to the police and other law enforcement agencies.

One of the major issues addressed by Operation Notarise is the complexity of policing criminal use of the Internet. Both Professor Alison and Dr Tejeiro have helped to develop online child protection tools that are helping law enforcement agencies in the UK and across Europe safeguard children and identify offenders and those at risk of contact offences.

The tools enable law enforcement agencies to quickly, easily, and reliably identify, from the available intelligence, individuals who are most at risk of committing contact child sexual offences, allowing police to take action to protect children.

Professor Laurence Alison, Director of the Centre for Critical and Major Incident Psychology within the Forensic Psychology Group, said: “We, on behalf of our teams, are very honoured to have received these commendations which recognise the strength of our partnerships with law enforcement.

“It is a privilege to work with these agencies to develop such vital tools for detection and prevention of these crimes.”

Dr Ricardo Tejeiro, said: “This commendation is a badge of quality and reinforces our commitment to maintain the University of Liverpool as the leading institution in the area.”

The commendations were presented to Professor Alison and Dr Tejeiro during a ceremony at NCA CEOP Command on Thursday, 30 June 2016. 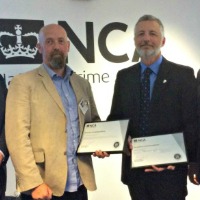