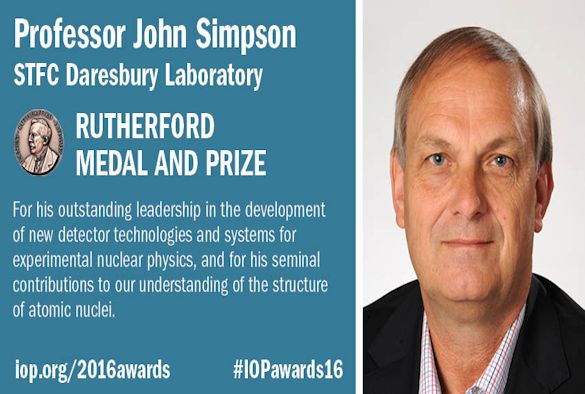 Professor John Simpson, a Visiting Professor at the University and a Liverpool alumnus, has been awarded the prestigious Rutherford Medal and Prize for 2016 by the Institute of Physics (IOP).

The Rutherford Medal and Prize is awarded every two years to an outstanding nuclear physicist, and Professor Simpson joins the ranks of other distinguished recipients of this accolade, who include Nobel Prize winners Professor Peter Higgs, Sir John Cockcroft and Professors Aage and Niels Bohr.

Professor Simpson, who is also Head of the Science and Technology Facilities Council’s (STFC) Nuclear Physics Group, received the award for his outstanding leadership in the development of new gamma ray detector technologies, which have transformed the field of nuclear spectroscopy. He is also recognised for his significant contributions to our understanding of the structure of atomic nuclei through his experimental nuclear physics research within the UK and internationally.

Professor Simpson said: “I’m delighted and honoured to be recognised by the Institute of Physics with this award. I feel very grateful to those I have worked with, at STFC and across the UK, and through international collaborations, all of which are playing their part in revolutionising what we understand about nuclear structure today.”

Professor Simpson has played a lead role in a number of international collaborations, most notably in the formation of a12 country collaboration to build the AGATA detector, which led to unprecedented insights into nuclear structure. He is also exploiting the instrumentation and technical advances resulting from these collaborations in areas of societal importance, particularly medical imaging, security systems, waste and environmental monitoring.

Professor Susan Smith, Head of STFC’s Daresbury Laboratory, said: “I’m thrilled that Professor Simpson has been awarded the Rutherford Award and Prize by the Institute. This is well-deserved recognition of his outstanding scientific work that has contributed significantly to the health and vitality of world-leading nuclear physics research over the past four decades, and for his inspirational contributions that are revolutionising what we understand about nuclear structure today.”