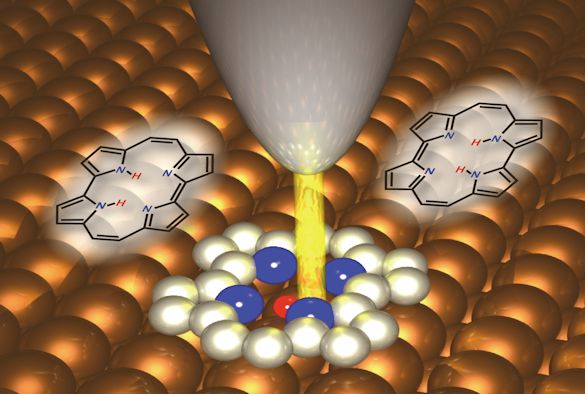 Researchers at the University of Liverpool are part of an international team that have shown a new way to operate a single molecular switch based on mechanochemistry.

In a study published in Nature Chemistry, the team which included Fritz-Haber Institute of the Max Planck Society (FHI-MPG), Berlin, Donostia International Physics Center, San Sebastian and the Polish Academy of Sciences, showed how hydrogen atoms in a single organic molecule adsorbed on a surface can be switched in a controlled manner on a sub-molecular scale by the force from an atomically sharp, metallic tip.

This so-called tautomerization of hydrogen atoms is an important reaction in organic chemistry and molecular biology and is also a promising process for realizing single-molecule switches in molecular device applications.

In addition, by using chemically modified tips, this tip-induced process also provides a new strategy to gain a deeper atomistic insight into catalytic reactions and a new control of single-molecule chemistry.

Liverpool Chemist, Professor Mats Persson, said: “This research is a new finding in the field of mechanochemistry and has implications for the development of future nanotechnologies in particular molecular devices such as switches for molecular electronics.”

Takashi Kumagai at FHI-MPG, who initiated the study, wanted to explore the question of how much force is needed to operate a single-molecule switch. To address this, the researchers attached an organic molecule that exhibits tautomerization to a surface and approached the tip of a combined atomic force and scanning tunneling microscope within a few atomic distances above the molecule.

The force was obtained by measuring the tiny frequency shift of the tip oscillating at its resonance frequency with an amplitude about the size of an atom. The switching showed up as a jump in the frequency shift upon approach of the tip and was also confirmed by atomic-scale imaging by measuring the electron current while scanning the tip above the molecule.  The force required to switch the molecule was found to be less than the weight of a water droplet with a radius of 0.00003 m. The switching occurred only at specific tip positions above the molecule.

The research team also carried out extensive computer simulations in order to elucidate the atomistic mechanisms behind the force-induced tautomerization. Their  calculations revealed that the tautomerization occurred by a reduction of its energy barrier upon approach of a metallic tip, while it could not be induced by a tip terminated by a Xe atom due to its inertness and softness.