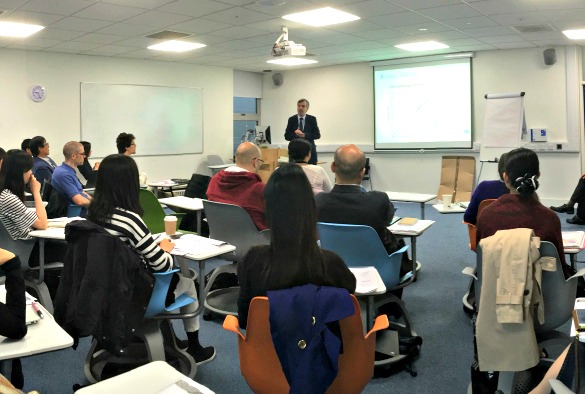 Professor Malcolm Jackson at the opening of the workshop

The University recently hosted a week long (28 June – 5 July 2016) international workshop for researchers on the Ageing Society as part of a British Council funded strategic collaboration between UK and Japanese academia and industry called RENKEI.

RENKEI is the Japanese word for “collaboration” and in this context also stands for Research and Education Network for Knowledge Economy Initiatives. It is an initiative of six Japanese Universities, six UK Universities and the British Council Japan.

The workshop, attended by 20 postgraduate researchers and research staff from the UK and Japan, was delivered by the University’s Institute of Ageing and Chronic Disease (IACD), with help from the Centre for Lifelong Learning.

The workshop was hosted by Professor Malcolm Jackson from IACD and facilitated by Dr Kate Bennett from the Institute of Psychology and Health and Society (IPHS) and Dr Richard Hinchcliffe from the Centre for Lifelong Learning (CLL).

The event was the second part of a two stage workshop, the first of which took place in Osaka in October 2015 attended by the same participants.

The researchers looked into themes surrounding ‘Ageing in Society’ and took part in sessions to generate ideas for projects alongside professional development activities. The workshop examined a number of different approaches ageing including the sustainability of long-living societies adapting to employability, a future city, issues on death and dying and the transfer of knowledge from the old to the young.

As well as taking part in a number of lectures and visiting the Reeve Court Retirement home in St Helens the delegates also attended a welcome dinner with Vice Chancellor Janet Beer at 60 Hope Street and a Victorian Afternoon Tea at the Victoria Gallery and Museum.

The workshop concluded with the delegates presenting their work to a ‘Dragons’ Den’ style to a number of external judges.

Professor Anthony Hollander, RENKEI lead for the University, said: “This was the first time the University has hosted an event as part of our RENKEI collaboration. We hosted 20 early career researchers from 12 institutions (six from Japan and six from the UK).

“These types of partnerships develop researchers for their careers and help to attract external investment opportunities for academic and student exchanges, alongside the opportunity for the University to further benefit from existing relationships with industry.”

Visit to a retirement home