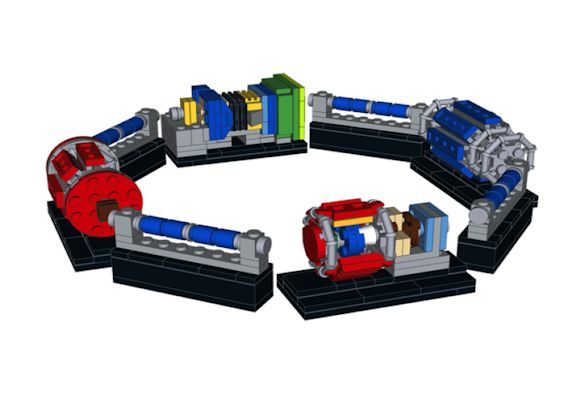 A model of the Large Hadron Collider (LHC) made out of Lego bricks has received 10,000 votes on the Lego Ideas web page, which means that it will now be reviewed for consideration by Lego as an official Lego set.

The LHC Lego model now moves to the Review stage where a “LEGO Review Board” composed of designers, product managers, and other key team members will examine the idea.  It received very positive feedback from the  Lego Ideas team on their Official Lego comments page.

The LHC Lego model is the brainchild of Nathan Readioff, a fourth year PhD student in the University’s Department of Physics, who used existing Lego pieces to replicate ATLAS, ALICE, CMS and LHCb, which make up the LHC.

Nathan, who is currently writing up his PhD thesis, has always been a Lego fan and began by designing the ATLAS detector before going on to make the other three detectors as well as miniature models of the dipole magnets used in the LHC to build a representative accelerator ring.

He said: “I am absolutely delighted that my model of the LHC made from Lego bricks is through to the next stage, and will now be considered by Lego for possible production as an official set.

“Lego models have already proven themselves to be a very useful way to explain to children about the LHC and its work investigating some of the most fundamental mysteries of the universe, from anti-matter to dark matter and the search for extra dimensions.”

The LHC is the largest and most powerful particle accelerator in the world. Its 27 km ring is buried 100 metres below the French and Geneva countryside. The LHC uses the world’s largest and most complex scientific instruments to study the basic constituents of matter.

Liverpool scientists have been major contributors to the LHC’s ATLAS experiment from the start. One of the tracking detectors that sits at the heart of ATLAS was constructed at the University’s Semiconductor Detector Centre. 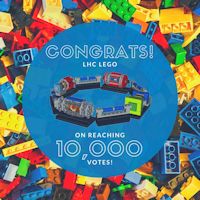