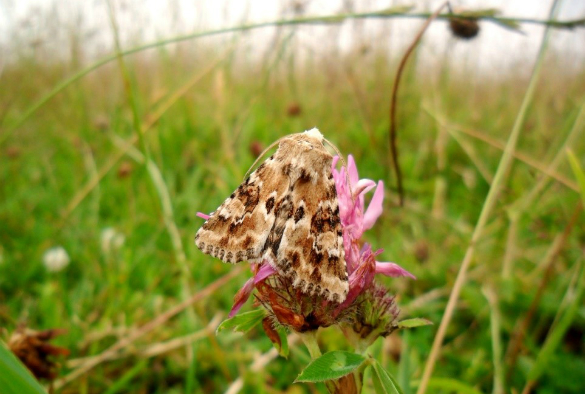 Wildlife-friendly farming schemes can help boost the abundance of many UK moth species, a new study by the University of Liverpool has found.

Large moths (macro-moths) play an important role as pollinators, but numbers have fallen in the UK by 28% since 1968. The situation is particularly bad in southern Britain, where numbers are down by 40%, with habitat loss thought to be behind the decline.

Scientists from the University of Liverpool and Natural England assessed the impact of schemes which are creating grassland habitats on the edge of arable farming fields.

The team surveyed macro-moths species on arable fields with and without wide grass margins, and on protected flower-rich chalk grasslands in southern England.

The findings, which are published in the Journal of Applied Ecology, show that even small-scale habitat creation can benefit the moth population, with the abundance of grassland moths 40% higher on wide grass margins compared to margins outside schemes.

Furthermore, moth species that are normally specialised to chalk grassland habitats also benefited from these schemes, provided that habitats were created close to existing chalk grassland.

Agri-environment schemes provide funding to farmers and land managers to farm in a way that supports biodiversity, enhances the landscape, and improves the quality of water, air and soil.

The study’s lead authors, Jamie Alison and Dr Jenny Hodgson from the University’s Institute of Integrative Biology, suggest that ‘spatial targeting’ of new habitats could help to increase the conservation benefits per pound spent on the schemes.

PhD student Jamie said: “We have found some of the strongest evidence to date that priority species could be more effectively conserved if land managers choose carefully where they create new wildlife habitats.

“It’s clear from our results that protected habitats like chalk grassland form important refuges for many kinds of wildlife, including moths, in intensively farmed landscapes.”

Dr Mike Morecroft from Natural England said: “It is important that we approach conservation at a landscape scale: this study shows how protected sites and wildlife friendly farming can complement each other to bring added benefits for species.”

The paper ‘Spatial targeting of habitat creation has the potential to improve agri-environment scheme outcomes for macro-moths’ is published in the Journal of Applied Ecology [DOI: 10.1111/1365-2664.12750].

The work was funded by the Natural Environment Research Council and Natural England. The study was made possible through the cooperation of Natural England advisors, farmers and landowners in the study region of Hampshire.