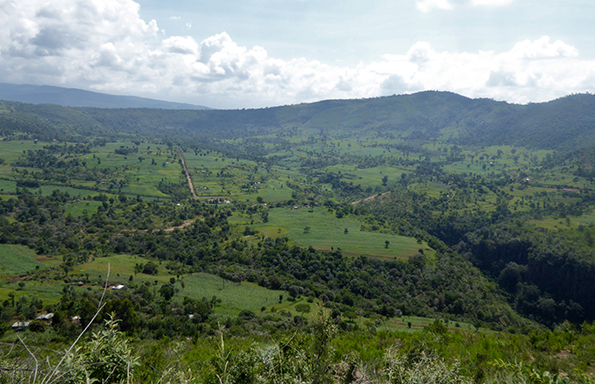 Kilombe Caldera and the head of the gorge

Tea arrives in an enamel mug, emerging from the jungle of tall maize stalks, one for everyone.  Nothing binds Kenyans and British people quite as much as the love of a good cup of tea.  Theirs is among the finest in the world.

Beyond the waving maize tips you can just see the wooded caldera rim, on all sides except the v-shaped cleft where the gorge descends into the outside world.  Until recently it was our only way up into what seemed like a lost world.  Why are we here?  Because of Philip the local farmer, who found fossil bone while he was digging a deep latrine pit, and took the initiative to report it to the National Museums.  He knew of our work on the outer flanks of the extinct volcano, and like most Kenyans had grown up aware of the region’s importance as a cradle of human origins.

It’s now our small world – the mountain higher than Vesuvius, its caldera two kilometres across – home to nearly twenty farming families, and temporarily host to archaeologists.  Until about five years ago we made the trek up the gorge, that looks like a set from Avatar.  Now a rocky and circuitous road that they took a year to carve by hand allows a land rover to make the laborious climb. 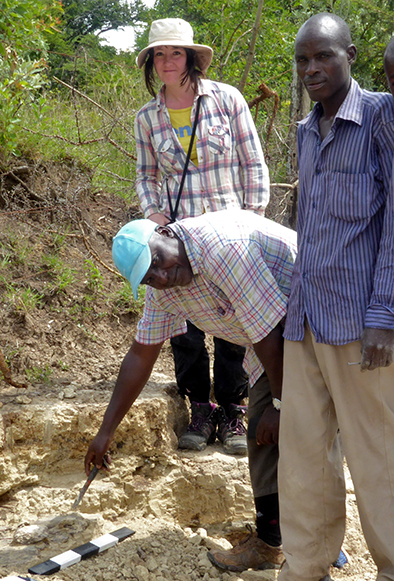 Two million years back this volcano and its neighbours were highly active: repeated eruptions sometimes spelled doom for animals that grazed here.  Their bones are well preserved, but encased in the rock-hard ashes or tuffs.  The farmers help enthusiastically – they have a stake in this.  With little formal schooling, they have an understanding and depth of interest which is truly humbling.  It’s a slow job, but in the end we can chip out just enough to get identifications, and to know how important it is to come back.  Now all is peaceful.  Above, puffy clouds are separated by acres of deep blue sky.  But they can easily join up and brew a thunderstorm that will see us off the mountain.

Are there other clouds?  Few places in the world seem quite safe at present.  Here problems feel far away, but after past incidents Kenya has grown to be alert, and local security send someone up to check us out – a good thing.  The general Kenyan response to threats is stoical and grounded, and the perspective of recent weeks in Europe suggests that tourism here is as safe as anywhere – perhaps it’s the time to grab a safari, with hotels and lodges relatively empty.  Kenyans ponder, though, whether our Brexit will affect their economy.  Their coffee, tea, and the flowers grown in huge greenhouses may be sold on tighter margins.  And for us, the question in education and business – can we focus separately on the many countries that we deal with?  Kenya is roughly the size and shape of France, with an equivalent but young population.  It presents great opportunities for co-operation and interaction. 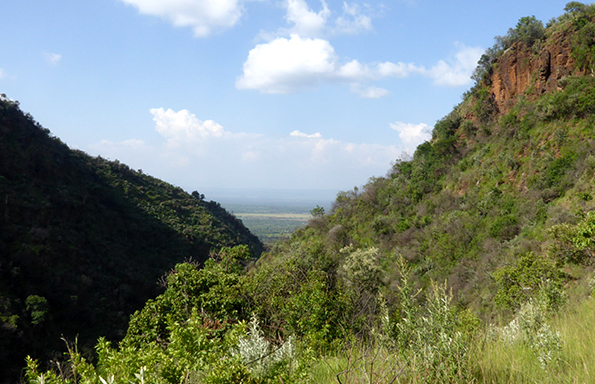 The gorge and the Rift Valley beyond

Our British Academy-supported links project with Kenya National Museums (KNM) has taken us deep into Kenyan life.  The country has many difficulties, but the pace of change is exciting.  Education is key to everything.  Once as a research student here, I felt sadly that it was largely wasted on young people who had little future.  As late as 2000 The Economist wrote off Africa as the lost continent.  In Kenya, though, people could build on a mastery of English, and a new generation was strikingly ready for the mobile phone and the internet, which have dramatically transformed life.  True, in the caldera there is reception only in one spot under a tree, where the signal comes up the gorge.  But that will change rapidly. The progress of development is unstoppable.  A pickup full of electrical gear grinds up the hill; electricity poles are already up, though waiting for the vital link up the mountainside where the poles are scattered along the roadside like giant matchsticks.  Kenya Power announces that it has put 1.25 million more people on the grid in the last year, and it aims for 70% coverage in the near future.

Stephen, Our KNM collaborator, has just been made Chair of Governors of a secondary school south of the mountain.  We visit and are greeted by the head, a quiet spoken man, tidily suited, who is totally committed to making the most of slender resources.  Over a decade he has built up the numbers from around 20 to more than 250.  The power means that computers are running in the office.  The last classroom has no roof yet, but on a sunny day pupils congregate there.  Outside we hear that new latrines are needed.  Not water closets – here the progressive eco-friendly way to build toilets is as exceptionally deep long drops – we are amazed to learn that the latrine will go down sixty feet down through the volcanic rocks that we know so well.  Someone is chipping away far down in a broad shaft whose vertical face s would do credit to any archaeologist.  Inside and outside the mountain digging deep seems a positive way forwards around here. 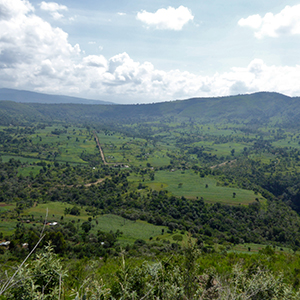