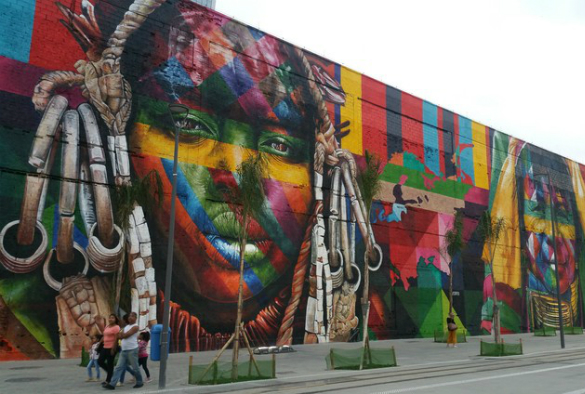 Dr Beatriz Garcia is Head of Research and Cultural Policy at the Institute of Cultural Capital, University of Liverpool.

“Rio was the first summer Olympic host city since Barcelona 1992 not to host a four-year Cultural Olympiad. Has anyone noticed?

The Cultural Olympiad, or official Olympics cultural programme, is probably the less valued dimension of the games. Despite its 104-year history, organisers have struggled to fund it, the media have been reluctant to cover it and the general public has generally ignored it.

Despite this, as well known by connoisseurs of the art world in places as diverse as LA, Sydney, Torino or London, much has been achieved by artists and cultural entrepreneurs in past games. And after 2016, in the wake of the ambitious Agenda 2020 (a roadmap to the future of the Olympic movement under the auspices of the International Olympic Committee), much more is expected from art and cultural interventions during and between Olympics editions.

Rio 2016 proposed to focus its cultural programming efforts on the year countdown to the games and the months following from them. Its programme, Celebra, was to achieve this via pop-ups, flash-mobs and micro-festivals. But the dramatic cuts to Brazil’s culture budgets nationwide had a direct impact on the already vulnerable Celebra team.

Unlike other culture-related games programmes, such as the high profile opening and closing ceremonies or the torch relay, the Cultural Olympiad has never counted on a protected budget and its operational framework is not defined within the Olympic host city contract. In Rio, this led to the programme being sidelined. The Olympic-fortnight cultural activity was led, instead, by separate bodies operating outside the organising committee, under no common umbrella.

So what did art and culture at the Rio 2016 Olympics look like? From Rio residents’ perspective, the main bulk of cultural programming was seen in the streets themselves.

Rio’s Boulevards took on the tradition of hosting “live sites” (large screens in the open air to broadcast sports for non-ticket holders) but extended it so that they also incorporated wider culture and street art. The largest, at the newly regenerated Porto Maravilhas, is set to become the main urban cultural legacy of the games, linking up to a new museum dedicated to “tomorrow” and a new art museum with some of the best views in the city.

The museums were oversubscribed throughout the games, while up to 4m people (according to the city’s tourism department) packed Porto Maravilhas over the Olympic fortnight. Monumental high-concept graffiti covering previously derelict warehouses are contributing to the attractiveness of an area that a year ago was considered no-go, dangerous and abandoned.

At another end of the spectrum is the IOC’s first Artist in Residence Programme. This programme, which sponsored an emerging USA vine artist, an established German writer, and the French artist JR, is unprecedented and set to help overcome the strongest barrier to Cultural Olympiad visibility and relevance. For the best part of the last 30 years – ever since the establishment of a global Olympic marketing framework – offering platforms for artists and cultural institutions at the games time had become a challenge. Branding conflicts, disagreement over how the term “Olympic” can be used, and long established suspicions from the arts world against the Olympics as a route to artistic quality and freedom meant that few truly successful Olympic and art collaborations have taken place in recent years.

But this year, international media have been keen to cover the work of French artist JR in particular. His three “giants”, propped on top of buildings and emerging out of the water, are a homage to those athletes that could not make it to the games but deserve to be noticed. The work is effective in conveying “Olympic values” while retaining credibility as pieces of art – and making a visual impact.

And InsideOut, another JR intervention, worked wonders in the Olympic city, representing thousands of people, from residents to athletes, in enlarged-portraits covering the walls and floors of the Maracana Stadium, Olympic Village and Boulevard Olimpico.

The artists in residence experiment has been considered a success, despite mixed levels of awareness in Rio itself (other than InsideOut). An expectation is being raised that art has a role to play at the Olympics. And response from the arts and design world itself, as well as those mainstream media that noticed, has been positive.

In the aftermath of the games, after a well received closing ceremony that didn’t shy away from high art concepts, the overall feeling is one of achievement, despite the dissipation of the original programme, Celebra. The city’s artistic offer was not as diverse, well promoted and nationally representative as originally intended, but the boulevards and unprecedented artist residences have given the games a valuable arts and cultural edge.

The baton has now been handed over to Tokyo, a city that has been making strong cultural statements since its bid stage and has proven them throughout its time in Rio. These included the Japan House, dedicated to showcasing Japanese culture, and the Tokyo House, which focused on contemporary art manifestations. Tokyo 2020 will be the first city to fully enact the IOC’s Agenda 2020 recommendations and seems determined to push the Cultural Olympiad back to centre stage, launching its official arts programme in October 2016.

The Rio 2016 organisers delivered their games without a formal Olympic Cultural programme. Without protected cultural budgets and despite endless political, economic and environmental challenges, the city proved capable of throwing a big party – and leaves valuable new public spaces to continue them. But waiving a Cultural Olympiad also meant that many of the inspiring interventions taking place have been missed by a majority of residents and were not connected with as many communities as they could have been. Sustainable creative legacies cannot just build on a good party but also strategic, ambitious and consistently promoted cultural programming.

If Tokyo is ready to put strategic thinking as well as resources behind its cultural programme, now that the IOC is equally keen to contribute and push for a more ambitious artist-led agenda, this may be the time to finally put #OlympicArt on the map, prove the sceptics wrong, and renew and advance some of the more tired aspects of the games staging process.

Despite our little appreciation of this programme to date, the Olympic Games cannot be fully successful and ensure strong and distinct cultural legacies without an equally ambitious cultural programme. It is time this retakes to the stage and is allowed to operate as a core and deserving Olympic ambition, not just as something loitering behind the scenes.” 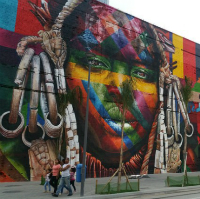