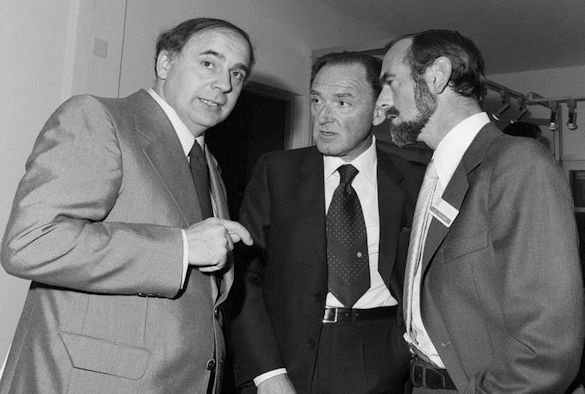 Photo from CERN with Professor Gabathuler (left) in his role as Head of Experimental Division Credit: CERN

Professor Gabathuler gained his Ph.D. from Glasgow (‘61) and then moved to Cornell. When he returned to the UK in 1964 he established major parts of the experimental program of the NINA program at Daresbury Laboratory.

In 1974 he moved to CERN where he was the initiator and leader of the European Muon Collaboration.  He became Head of the CERN Experimental Division in 1978, a post which he held until 1982. Erwin guided the CERN programme during the critical era that led to the discovery of the W and Z for which Carlo Rubbia and Simon van de Meer were awarded the Nobel Prize in 1984. At the behest of the UK Particle Physics community, and in order to restore Liverpool’s particle physics fortunes which had flagged since the Chadwick era, he became head of the group at Liverpool in 1984.

He successfully led the group’s regeneration, founding the CPLEAR experiment at CERN and building a strong physics programme on two continents: the BaBar at the Stanford Linear Accelerator and DELPHI experiments at CERN, and the H1 experiment at DESY Hamburg. He also laid the foundations for the group’s future experimental programme in the LHC era on the LHCb and ATLAS experiments.

The work of the BaBar and ATLAS collaboration have directly led to Nobel Prizes. On his retirement, in 2001, there was an international celebration of his work and career – the eponymous “Erwinfest”.

Without doubt he was an influential scientific leader recognised nationally and internationally. At Liverpool he was widely admired and respected. To his colleagues he was a friend and mentor exhibited amazing concern for their individual well-being and career advancement whilst insisting on delivery of physics of the very highest standard.

He was a great experimental physicist who was befriended everyone with whom he interacted with from undergraduate to postgraduate student to Vice Chancellor to government minister. Liverpool have lost a “giant” and without him there would be a much less bright future for physics.”

Erwin Gabathuler was elected to the Royal Society in 1990 and received the Institute of Physics Rutherford Medal and Prize in 1992. He was awarded the Order of the British Empire in 2001 for services to physics.