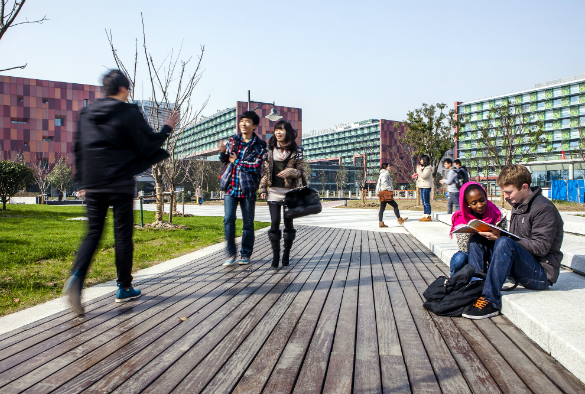 The 28th European Association for International Education’s (EAIE) annual conference takes place this week in Liverpool, and we’re shining a spotlight on some of the key conference events that the University is involved with.

Ahead of the session ‘The road less travelled: taking Western students to China‘ we focus on the University’s new Year in China programme.

Dozens of students from the University of Liverpool recently touched down in China to start a year-long academic and cultural adventure, expecting to boost their knowledge, life-experience and career prospects.

They are the first to take part in the university’s new “Year in China” programme, where students learn about China and the Chinese language.

Among them is law student Jenika Pankhania, 20, who says she was inspired to make the trip by China’s history and culture – and its growing importance in the world.

“I came here on a four-week summer school last year and I really loved it,” she says.

“Mandarin is such an up-and-coming language and China is influential in Law so I think coming here will give me an edge and I think it would help students generally – those interested in business or others. China is becoming so important.”

Jenika is among 37 students from the University of Liverpool who have taken up the opportunity in this the first year of the programme. In total, about 50 students from Liverpool will be there on various schemes this year.

They are part of a growing trend and it’s a path that other students, universities and countries seem keen to follow as the world looks increasingly to China as a major economic force. The country recently hosted the G20 summit of leading industrial nations for the first time and its influence in higher education is also growing as its universities move up the international league tables.

More western students and graduates are considering the benefits of having “China” on their CV. In the past decade, the number of UK students going to China has been increasing – from 188 in 2007-8 to 476 in 2012-13.

Liverpool’s “Year in China” programme – which is taught in English – is usually taken by students at the end of their second year and costs £1,350, which can be covered with tuition fee loans.

XJTLU, as the university is known, is where students on the Year in China programme from Liverpool University study.

It is in new buildings in the fast-growing, affluent but ancient city of Suzhou, which is not far from Shanghai. Suzhou is known as the “Venice of the East” because of its canals, bridges and ornamental gardens.

Students on the scheme take  courses from XJTLU’s BA Chinese Studies programme – which involves learning Chinese and studying the country’s history, politics or culture.  Some students also have the opportunity to follow a module related to their core degree.

Jenika says attending the summer school at XJTLU last year opened her eyes to China and the opportunities it holds; when she came back she approached Liverpool University’s Study Abroad Office to apply to do the whole year.

“We learned about Chinese culture and it was only then that I realised how rich it was in its culture and traditions and how vast the country is,” she says.

“We learned about calligraphy, art and history as well as doing touristy things, such as seeing the Terracotta Warriors.”

Jenika arrived in Suzhou at the end of August and says she is adjusting to the heat and the humidity (carrying a fan everywhere) and quickly mastered the art of using chopsticks.

“There is a lot of support here to help you settle in,” she says.

She hopes the Year in China will help her find a rewarding job in Law – perhaps in the commercial or immigration field – and is planning on using the holidays to do work experience in Hong Kong or Shanghai.

Most students on this scheme will go in their third year – which means extending their degree by one year – and will graduate with a degree in “Law with a Year in China”, for example.

Will China be the new “must-have” experience for young people graduating into an increasingly-globalised world?

Professor David Goodman, who leads the China Studies programme at XJTLU, believes students benefit from the exposure to China and its culture in many different ways, not least because of its growing economy.

“I’m not expecting everyone should become a Chinese speaker but everyone needs to know something about China and have a little exposure,” he says.

“All kinds of students can benefit. You get great teaching, are taught in English; you get to travel. China is a beautiful country. The people are fascinating and the food is wonderful and varied. There are mountains, waterfalls, amazing railways, different religions – something for all.”

He says students choosing to do a Year in China come from all disciplines.

“There are those you would expect – studying cultures and social sciences – but also biologists, scientists, engineers and large numbers of Business Studies students.”

Professor Goodman is speaking about western students going to China at a conference of the European Association for International Education (EAIE) in Liverpool taking place in Liverpool from September 13-16 , alongside the Chancellor of another break-through institution in China – the Shanghai New York University, Lizhong Yu.

The institution was set up in 2012 as the first Chinese-US joint venture university, under a partnership between New York University and East China Normal University. Half of the students there are from China and half are from the rest of the world. They study a Liberal Arts programme and can move between different campuses around the world.

Lizhong Yu said: “A study abroad experience in China can broaden the vision of students and provide wider opportunity for career development, as China is a country with great opportunity and potential. The relationship between China and rest of the world would be one of the key issues in future.

“Being in China, getting in touch with Chinese people and experiencing the change of the community, will surely deliver transformational change and advanced employability.”

Professor Goodman of the XJTLU has first-hand experience of the changes in China. He first went there in 1976 and says it was like “another planet” and that although living standards have greatly improved, it is a continent with wide variations in wealth.

“The economy has changed dramatically. The food then was very limited. We used to eat rice with Chinese cabbage and pork fat. It’s so different now. I ride a bicycle and people say ‘that must be dangerous’, but there are cycle lanes everywhere. The danger is from  rich young men driving around corners in Maseratis.

“Consumer society has grown, there are greater political freedoms and greater openness to the outside world. Some things have been lost and it’s a different place, but it’s still China. Standards of living have risen and life is more certain than it used to be.”

What advice would Professor Goodman give to students thinking about having a Year in China?

“Don’t think twice about it. It’s going to make your career. You are going to soak up knowledge that is going to be useful and make contacts in China and beyond – and all this will make your life richer. It was a fantastic experience for me and it changed my life.”

And student Jenika Pankhania, starting out on the Year in China programme, said: “Go for it! You only regret the things you don’t do. If you don’t try it you will never know and if you really don’t like it, you are only a plane ride away and these experiences don’t come up very often. You never know what you might learn in a different country.”

For more about the Year in China programme please visit: https://www.liverpool.ac.uk/study/undergraduate/goabroad/year-in-china/ 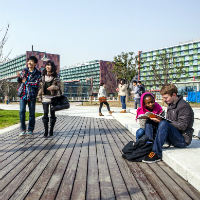